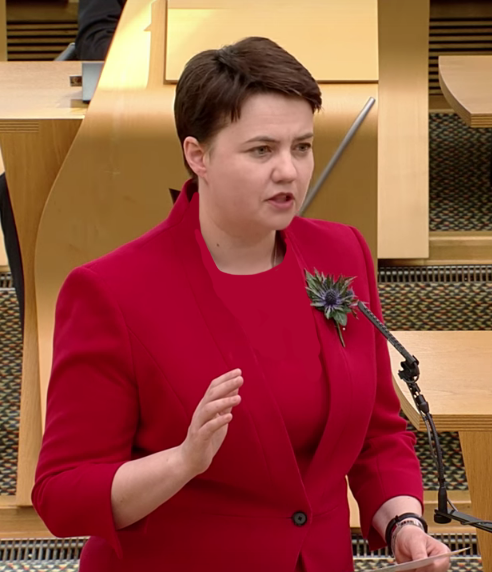 Scottish Conservative Leader Ruth Davidson last night spoke at the Board of Deputies President’s Dinner of her pride in the way that Scottish politicians had collaborated to confront antisemitism.
Ruth, in conversation with the BBC’s Director of News and Current Affairs James Harding in front of an audience of more than 550 guests, including Home Secretary Amber Rudd, said: “In Scotland we have seen an issue, particularly with some of the Jewish community. We’ve seen some terrible things daubed on the side of a temple, we’ve seen a senior rabbi faced with people who were giving Nazi salutes as he went to a place of worship.
“One of the things I’m proud of in Scotland is that there is actually political leadership against this.”
On the centenary of the Balfour Declaration, Ruth also paid tribute to Lord Arthur Balfour, who she described as “another great Scottish Conservative”.
She added that she was proud of the links between Israel and Scotland. ““I’ve welcomed to my own constituency the Shalom International Festival, which as well as celebrating Judaism, also invites performers over from Israel to make sure that the cultural exchange is there”, Ms Davidson said.
“We’ve seen a 60 per cent rise in trade between Scotland and Israel in the last 10 years – it’s now about £120 million a year – and these are the sorts of things we want to build on.
She also commented on the Brexit process saying that, “were there to be another referendum I’d vote to remain again”.
Board of Deputies President Jonathan Arkush paid tribute to the dinner guests and community members who enable the organisation to do its important work. He said: Without you there would be no Board of Deputies. We would not be able to serve our community, our community’s future, which is also your future. It is with enormous pride that I stand before you as elected president of the Board of Deputies for British Jews. It is an honour to speak forthrightly for our community on every relevant issue.”
Also attending the dinner in central London were World Jewish Congress President Ronald Lauder, UK Ambassador to Israel David Quarrey, French Ambassador to the UK Jean Pierre, Sir Eric Pickles, Senior Rabbis Laura Janner Klausner, Joseph Dweck, Danny Rich, Baroness Ruth Deech and number of MPs and peers.