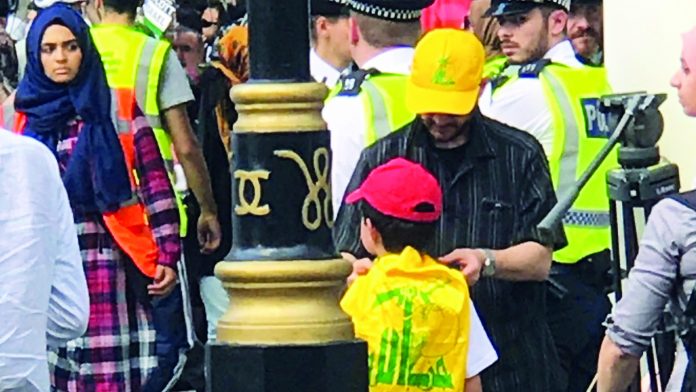 As hundreds of supporters of Hizballah, the genocidal anti-Semitic terrorist organisation, prepare to parade through central London with Hizballah flags, over 10,000 people from 646 of the UK’s 650 Parliamentary constituencies have signed a Parliamentary Petition calling for Hizballah to be fully proscribed. The Parliamentary Petition, started by CAA, rapidly gained 10,000 signatures after a number of days as the most popular petition on Parliament’s website.

The petition was snubbed by some Jewish community organisations, but fiercely backed by figures such as Campaign Against Anti-Semitism’s Honorary Patron, Colonel Richard Kemp, the former commander of British forces in Afghanistan, who tweeted that every British citizen should sign the petition in support of British soldiers, describing Hizballah terrorists as “animals” who “murdered and maimed British soldiers”.

The dangerous pro-Hizballah parade is currently permitted due to a legal loophole. Whilst the British government has proscribed the “military wing” of Hizballah under the Terrorism Act 2000, the “political wing” is not proscribed, something that even Hizballah finds ridiculous. Indeed, its Deputy Secretary-General, Naim Qassem, mockedthe distinction, saying in 2012: “We don’t have a military wing and a political one; we don’t have Hizballah on one hand and the resistance party on the other…Every element of Hizballah, from commanders to members as well as our various capabilities, are in the service of the resistance, and we have nothing but the resistance as a priority.”

The Home Secretary is the only person whose signature can instantly proscribe the whole of Hizballah. We have already written an open letter to him along with a prominent Muslim anti-extremism organisation. In our letter we noted: “Hizballah seeks the extermination of Jews. Its Secretary-General could not have been plainer when he said: ‘If Jews all gather in Israel, it will save us the trouble of going after them worldwide.’ Hizballah has acted on its murderous mantra, bombing Jewish civilians from Buenas Aires to Burgas, and it has even been blamed for two bombings targeting Jews in London in 1994. That this brazen annual parade can take place makes a mockery of counter-extremism initiatives, emboldens those who seek to incite hatred and shames our nation.

We have also met with the Metropolitan Police Service along with other Jewish organisations to voice our grave security concerns. The danger posed by this parade to British Muslims and Jews is clear and present. It is a rallying point for anti-Muslim bigots who wish to portray all British Muslims as terrorist sympathisers, and for anti-Semitism, who admire Hizballah’s stated mission to seek out and murder Jews around the world. Last year, the terrorist Darren Osborne decided to ram the march with his car but he was unsuccessful and instead rammed his car into a mosque, killing one and injuring twelve. Simultaneously, the march itself is a font of anti-Semitic invective, last year even featuring claims bellowed by its leader that ‘Zionists’ paid the Government to burn down Grenfell Tower.

The parade will be closely monitored by a substantial evidence gathering team from our Demonstration and Event Monitoring Unit and then analysed by our Crime Unit and Regulatory Enforcement Unit. It is our intention to take legal action if possible.

Gideon Falter, Chairman of Campaign Against Anti-Semitism, said: “10,000 decent people from every part of the UK, from Orkey to St Ives, have stood together to say that enough is enough. We want these pro-terrorist parades off our streets. They make a mockery of counter-extremism efforts, are a rallying point for supporters of Islamist terrorism and fuel the far-right, already resulting in a terrorist attack which has killed one British Muslim and injured twelve others. Under Parliamentary rules, the Home Secretary is now required to respond to the petition, and as a decent man who has long stood firm against Islamist extremism, we ask him to respond by fully proscribing Hizballah under the Terrorism Act and thereby closing the legal loophole which allows these revolting and dangerous pro-Hizballah parades to take place.”