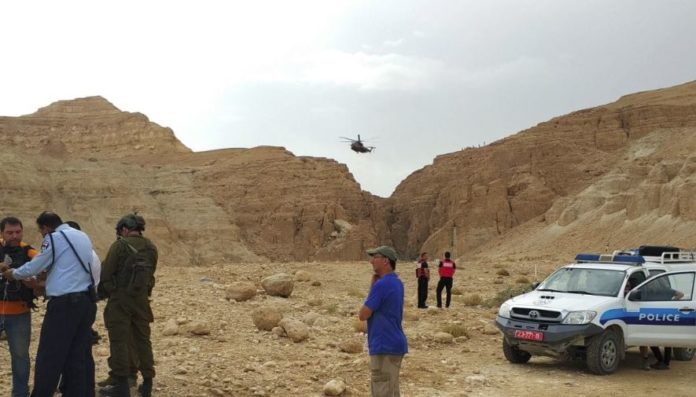 A horrific tragedy is unfolding in Eretz Yisroel on Thursday afternoon.

A group of 25 youths traveling on a bus in Nachal Tzafit in the Aravah found themselves trapped, during flash flooding on Wednesday. Police and volunteers from the Aravah Search & Rescue Unit, working in cooperation with military helicopters began the search for the missing youths.

ZAKA is reporting that the death toll in the flash flood disaster has reached seven R”L. (Earlier reports that the victims are from a Hesder Yeshiva are inaccurate.)

At one point, the students got off the bus they were in, entering the nachal and began walking. It was then that they were literally swept away by the powerful flashflood.

It is confirmed that there were both males and females on the trip to the Aravah area nachal.

It is yet confirmed that seven victims remain in critical condition, two others in serious condition, and three others are in moderate condition.

There are still three or four persons missing. Their general area is known to rescue officials but that have to be found.

Soroka Medical Center in Beersheva has declared a multicausality incident, mobilizing all emergency services in the emergency and trauma rooms accordingly. Soroka is the southern area Level 1 trauma center.

Two IDF rescue helicopters were searching the area in an attempt to locate the others still missing.

Search & Rescue units from Dimona, Beersheva, Yerucham, Beit Shemesh and fire department divers are involved in the efforts to find the missing youths. Rafts and other marine rescue craft stand by to respond to rescue those still missing from the flash flood. The operation is being overseen by area Israel Police commanders.

Rescue personnel are doing their utmost, as visibility begins to wane with shekiya and nightfall approaching. The IDF’s elite 669 search & rescue choppers have been involved in the operation since it was realized just how many persons were involved. The experts explain that once the sun drops, the situation will become far more difficult and rescue efforts will be complicated at best.

A MDA chopper is also operating in the area.,

At least one person rescued is B’chasdei Hashem reported in only light-to-moderate condition, as s/he succeeded in finding safety by holding on to and then climbing onto large boulders.

KAN News reports the victims are all about 18-years-old, all from the same educational institution, located in the center of the country.

Israel Chief Rabbi Dovid Lau has spoken with leaders of the school that the students attend. Rav Lau is calling on the tzibur at large to be mispallel on behalf of the victims, who are in need of Rachmei Shomayim. Rav Lau calls on those who can to recite Tehillim.

Police state that they continue overseeing the operation, which everyone davens will be a rescue operation and not chas v’sholom recovery. An emergency information number has been established for the families – 050-507-3789.

Meanwhile, Tamar Regional Council officials urge the general public not to come to the Dead Sea and Aravah areas due to the inclement weather condition and flash floods in the area. As a result of the nature of the area topography, visiting and hiking during these weather conditions can be extremely dangers. Schools in the area were closed on Thursday, 11 Iyar, due to roads be closed or blocked as a result of the stormy condition.

The Education Ministry Situation Room reports this trip was not filed or cleared by the ministry and therefore, it was unauthorized.