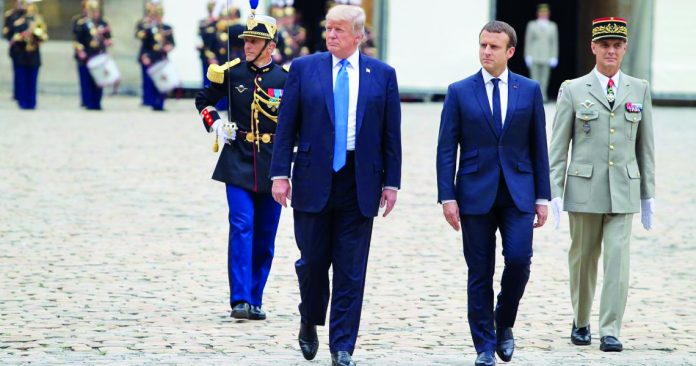 French President Emanuel Macron said earlier this week he wanted to develop a “new deal” to stop Iranian nuclear activity as he sought to persuade US President Donald Trump not to abandon the Joint Comprehensive Plan of Action (JCPOA).
The two leaders met as part of Macron’s state visit to the US. The French President said after the meeting that he was “very happy about the discussion we had together,” and said that they had discussed “new” solutions to stop Iranian nuclear activity both now and beyond 2025 when the current deal expires.
Speaking in the Oval Office, Trump, a long-term critic of the JCPOA, said the deal should have included tighter restrictions on Iran’s missile testing capabilities. He described the current deal as “ridiculous,” saying “it should never have been made”.
Macron made the case that the US and France’s objective should be to “contain the Iranian presence” in the Middle East and that the deal must be considered “as part of the broader picture, which is security in the overall region”.
Trump said: “Wherever there’s trouble, Yemen, Syria, no matter where you have it, Iran is behind it. And now, unfortunately, Russia is getting more and more involved. But Iran seems behind everything where there’s a problem. And we just have to take a look.”
He also expressed his frustration that Iran is “testing missiles,” adding “what kind of a deal is it when you don’t talk about Yemen and you don’t talk about all the other problems that we have with respect to Iran?”
When asked about the prospect that Iran may restart its nuclear program if the deal collapsed, Trump said: “It won’t be so easy for them to restart it. They’re not going to be restarting anything. If they restart it, they’re going to have big problems, bigger than they ever had before.”
Responding to the comments Iranian Foreign Minister Mohammad Javad Zarif said: “It is either all or nothing. European leaders should encourage Trump not just to stay in the nuclear deal, but more important to begin implementing his part of the bargain in good faith.” Iranian President Hassan Rohani said: “I am telling those in the White House that if they do not live up to their commitments, the Iranian government will react firmly. If anyone betrays the deal, they should know that they would face severe consequences.”