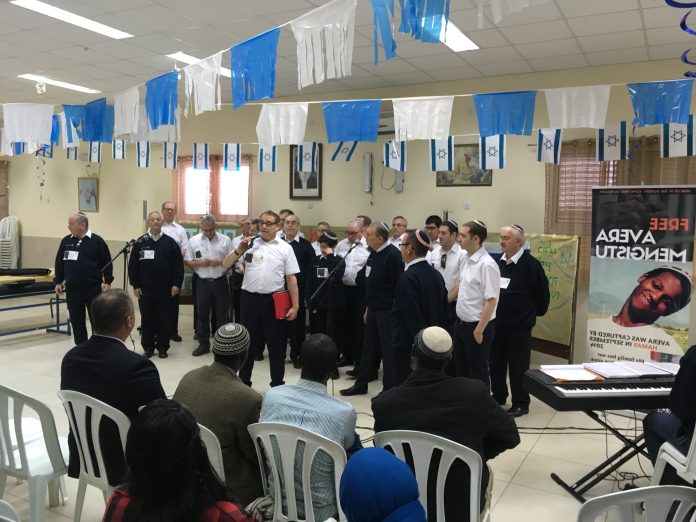 ‘The Shabbaton choir have just returned from their latest Solidarity Through Song mission to Israel, where they sang at 17 different events across the country over a 5 days period. They were joined by Marble Arch’s Rabbi, Lionel Rosenfeld, Stanmore’s Chazan, Jonny Turgel and Shimon Craimer from Riverdale, New York.

They began their mission by entertaining both paediatric and geriatric patients at the Laniado Hospital and Dorot Medical Centre in Netanya. Over Shabbat, there was standing room only in both the Young Israel and McDonald Shuls  where they led their unique ‘Shabbaton’ services followed by a full concert programme on the Motsei Shabbat.

The next morning, the choir and soloists raised the roof at the Netanya  Municipality Event, where they entertained an extremely lively and appreciative audience, comprised of residents who would otherwise be unable to attend concerts due to severe financial restraints. They brought cheer to patients from all backgrounds, religions and walks of life during their awaited return visit to Reuth Medical Centre in Tel Aviv. From there they took the coach to Bet Moriah, Be’er Sheva, to sing and dance with children in refuge  from neglected backgrounds and abusive homes. That evening, they uplifted the spirits of disabled war veterans at the state of the art Beit Halochem centre in Be’er Sheva, performing a new rousing and uplifting composition of ‘Mi Shebeirach’ for the soldiers of the IDF composed by the choir’s talented musical director, Stephen Levey.

They commenced the following day with a visit to the Hadassah Hospital, Ein Kerem. By the end of their first performance, collaborating with Dush, Hadassah’s head Medical Clown, patients on all floors of the hospital had come out of their rooms to clap along as they looked down to the bottom floor of the atrium where the choir were performing. Frowns were literally turned upside down as the music of BaShana Haba’ah and the angelic voices of boy soloists Rafi Sweiry and James Hart reverberated throughout the hospital. They ended their visit there in the hospital entrance, where song turned to prayer, as they pleaded to the almighty with the evocative words and music of Ana B’koach in the presence of a tearful mother and father whose child was about to go in to dangerous surgery following a terror induced injury. They inspired and were in turn inspired  themselves at an emotionally challenging visit to Aleh, where they sang and danced with residents with severe congenital and acquired disabilities. It was later that afternoon, at the Hertzog Hospital, where they were applauded by one relative for fulfilling the mitzvah of ‘Al Tashlicheinu L’eit Zikna’, not forsaking those in their old age as they entertained elderly patients on the rehabilitation wards. By another relative, they were thanked for using the gift they had been given to provide a few moments of joy for their relative in need of escaping his troubles and bringing a smile to a face which had not smiled in months through their entertaining renditions of ‘Shehecheyanu’ and ‘Tsur Mishelo’. They concluded the afternoon singing and dancing with children at the Shalva Centre, many of whom with Down’s syndrome and other severe learning difficulties.

That evening, they performed at a fundraising concert, where they were privileged to perform Levey’s YouTube sensation ‘Ose Shalom’, viewed over 3 million times, this time together with the mesmerising  ‘Shalva Band’, comprised of Shalva’s own multi talented students, who demonstrated their ability to transcend their impairments through the medium of music.

On their final day, they woke up early to sing to retirees in Protea Village in Shoresh. From there they concluded their mission headed by choir chairman Simon Hochhauser, by traveling down south to Ashkelon  where they provided comfort and hope to the parents of Avera Mengistu, an Ethiopian Jew with mental health difficulties who walked from his home and crossed the Gaza border fence in 2014, where he was captured by Hamas. He has been held captive ever since and his exact whereabouts and status is still unknown as is his story amongst the vast majority of the national and international community. Indeed, it was that final visit to sing to Avera’s community, which truly exemplified what the Shabbaton Choir’s Solidarity Through Song mission was all about.

Jonathan Arkush,  President of the Board of Deputies tweeted ‘It has been an inspiration to join @ShabbatonChoir for 4 days of performances bringing a little joy and comfort to hundreds of very unwell and disadvantaged people from all backgrounds in Israel. One of the UK Jewish community’s finest exports and they should make us proud’.

Both the choir and the numerous people they touched through their music remain forever grateful to the extremely generous donors who enabled this life-changing mission to take place.