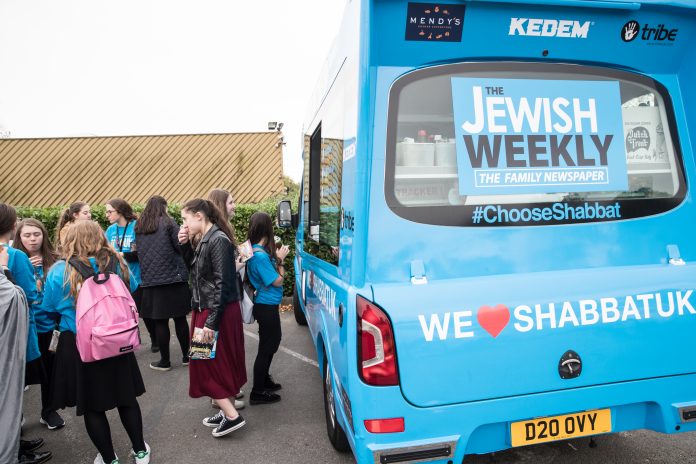 Uncle Doovy’s revamped ice cream van has started its whistle-stop tour of Jewish schools, synagogues and challah makes up and down the country handing out ice cream.

Ice Scream for ShabbatUK
1 of 45

The Jewish Weekly is the main sponsor of the mobile initiative, which continues until the HavdalahUK

Organisers of the national event have teamed up with the London-based paper together with co-sponsors Mendy’s, Kedem and Tribe to turn the only kosher ice cream van in Europe into the specially branded vehicle, which is clocking up many miles on trips across London, Manchester, Leeds, Birmingham and Oxford.

“Our readership has grown exponentially since we launched in March, so we are delighted to be involved in our first ShabbatUK,” said a spokesperson for The Jewish Weekly.

“Our demographic crosses the spectrum of Orthodox Jewry and we have more initiatives lined up in the coming months.”

The countdown to ShabbatUK was launched in spectacular style this week.

Activities kicked off at Watford & District Synagogue with a Tribe ‘Shabbat Experience’ Cheder event on Monday.

“It was amazing and beyond our expectations,” said Rebbetzin Rochel Levine.
“Over thirty children participated, singing and dancing, the community came together, which was wonderful.

“Parents have booked now for our challah make and we are expecting around 80 people for our Friday night event now. We are delighted with the response.”

Chief Rabbi Ephraim Mirvis was at the ShabbatUK Kids Concert at Lee Valley Athletics Centre on Tuesday with over 1,400 children from around 20 different schools in attendance. Rabbi Mirvis will be supporting a number of events over the coming days in the grand build up to one of the biggest weekends in the Jewish calendar.

Synagogues throughout London to Belfast, Birmingham, Glasgow, Leeds, Liverpool and Manchester have events organised including scores of challah makes, musical concerts and Friday night dinners with guest speakers as the largest number of participants for the event is anticipated by organisers.

ShabbatUK is the largest mass participation event organised for Jewish communities of the United Kingdom. Part of the International Shabbos Project, events are tailored specifically for each community. The key goal is to connect people with Shabbat by encouraging increased engagement with Shabbat observance, unifying the largest possible numbers of British Jews and empowering communities to achieve great things locally. Judging by this weeks activities ShabbatUK 2017 is gearing up to be the best ever. Don’t forget to pose for a picture by the van and send it to us at pictures@thejewishweekly.com for a chance to win a special prize.