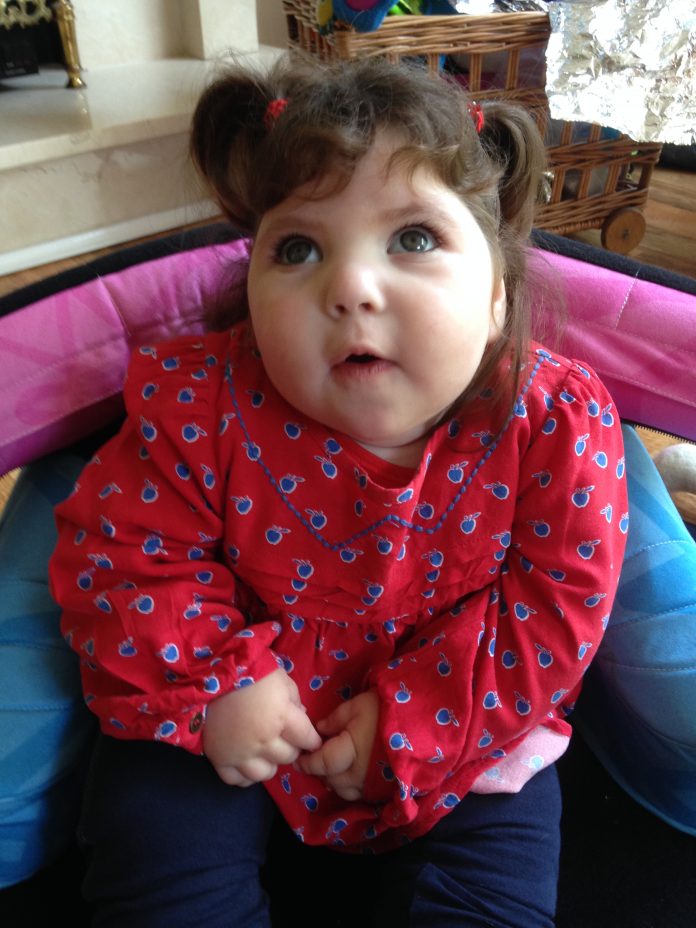 A Mill Hill family is fundraising to establish a new Camp Simcha night-time respite service in memory of their daughter.
While the UK charity, which supports families coping with serious childhood illness, presently offers occasional respite to those who cannot get this provision from the local authority, Sam and Lee Bladon are hoping to make it a regular service in their daughter Evie’s name.
Evie’s Night Owls, as the new service will be called, is holding its first fundraising event – Dress to Impress – in Mill Hill on October 19 from 7-9pm, a sale of 200 new party dresses for girls and teenagers.
Mrs Bladon says this will be the first of many fundraisers, organised by committee comprised of those who knew and loved Evie.
Evie was born in 2012. Oxygen deprivation during her birth resulted in severe brain damage and doctors didn’t expect her to survive past 48 hours but Evie was a fighter who went on to celebrate three birthdays with her family.
However multiple health issues, including cerebral palsy, global developmental delay, epilepsy, severe visual impairment and a number of other medical problems, resulted in the need for 24/7 care for Evie.
Amongst the many services the Bladons received from Camp Simcha, the charity arranged occasional night time respite, because on paper they were not eligible for this.
Mrs Bladon explains: ‘Presently it is only the most severe of the severe who are eligible for local authority night-time respite. Evie had to nearly die before this provision kicked in for us, but in the mean-time we were up every night with her.
‘The respite care we got from Camp Simcha was a life-saver. It helped us keep our heads above water. With all the worry that comes with a seriously ill child, functioning on no sleep night after night, and then having to deal with whatever each new day brought, while looking after your other children and going to work. it was so hard to keep going.
‘Our hope is that we can raise enough funds for Evie’s Night Owls to become an ongoing service through Camp Simcha so that all families like us, who need respite but aren’t eligible for it, can get this regular support from carers that they come to know and trust. We hope this will be Evie’s legacy.’
All the dresses have been donated by the Jacobs family and will be sold at reduced prices. There will also be an option for people to sponsor for someone who may not be able to afford one.
For more information on Dress to Impress or to sign up for the event go to www.campsimcha.org.uk/dress