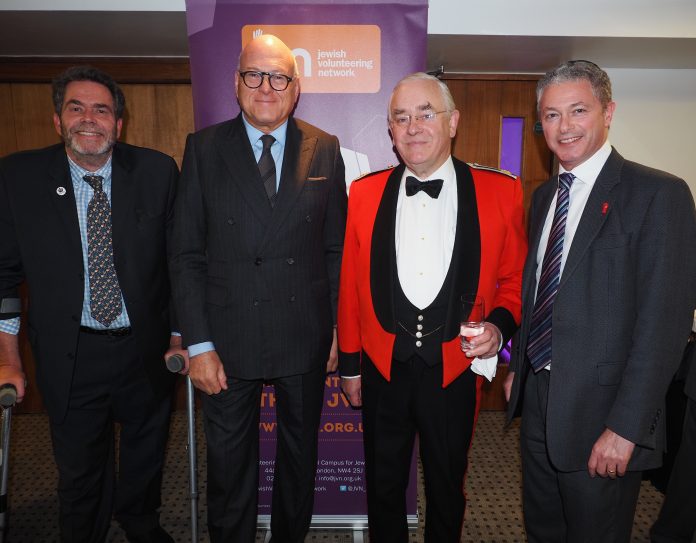 The Jewish Volunteering Network marked a decade of connecting volunteers to volunteering opportunities on Wednesday 27th September at its 10th Anniversary Gala Dinner.
Over 340 guests attended the inaugural Dinner at The Kinloss Suite, Finchley, which had the theme of ‘Heartbeat of the Community’, celebrating a decade since the creation of the community’s leading volunteering organisation.
JVN, primarily a web-based portal to volunteering, is respected both inside and outside of the Jewish community as an invaluable resource for Volunteer Managers, Trustees, charity CEOs and anyone involved in the voluntary sector, either as a professional or as a volunteer.
Simon Johnson, Chief Executive of the Jewish Leadership Council, compèred the hugely successful Gala Dinner, which also featured live music and a silent auction.
Guest Speaker Lloyd Dorfman CBE, the entrepreneur and philanthropist, focussed his address on the importance of volunteering. He said: “There are an astonishing 2,300 Jewish charities in the UK across a whole range of sectors, who rely on volunteers. At the heart of all this, we are lucky to have the Jewish Volunteering Network. At this self-reflective time of year we should all think about how we could do more. We need to renew our commitment to a culture of volunteering and the spirit of giving.”
JVN Life Patron, Daniel Levy, delivered the appeal , which explained how greater funds would enable the organisation to use new technology in order to expand its services and increase its visibility across the community, thereby reaching new volunteers.
The evening also offered an opportunity to recognise volunteering, both past and present. Selected previous winners of the annual Wohl JVN Volunteering Awards were inducted into the newly created Joy and Stanley Cohen Volunteers’ Hall of Fame, preserving their legacy and serving as an inspiration for others to engage in impactful volunteering activity.
Three key Awards were also given out, recognising some of the community’s most outstanding current volunteers. The Graham Edwards Award for Young Adult Leadership in Volunteering was presented to Jonathan Clingman from The Together Plan; the Maurice Wohl Charitable Foundation Volunteer of the Year Award went to Adam Shelley of JLGB; and Lilian Levy of the Association of Jewish Refugees received the Aston Chase Award for Lifetime Achievement in Volunteering.
During the course of the Dinner, JVN was also awarded The Queen’s Award for Voluntary Service by Deputy Lieutenant of Greater London, Martin Russell, the highest honour a charity can receive and the equivalent of an MBE for voluntary sector organisations. Receiving the Award on behalf of the charity was JVN’s President, Ros Preston OBE.
The event raised significant funds to secure JVN’s position as a leading community institution and to finance future expansion of its services. “We have some substantial developments in the pipeline for the next few years,” says JVN Chairman David Lazarus, “and we hope our inaugural Gala Dinner will allow them to become a reality. We will use the money raised to help us to reach new heights and to make a transformational impact on the landscape of the charity sector, both in the Jewish community and beyond. It is a very exciting time to be involved with JVN and we are all looking forward to what the next decade will bring.”