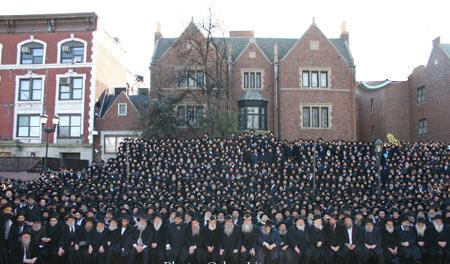 In the build-up to the event, thousands of Shluchim were led in prayer by a delegation from Pittsburgh in memory of the 11 victims of the anti-Semitic massacre last month.

Emissaries spent Shabbat with congregations in Pittsburgh synagogues and college campuses before travelling to New York.

The event aims to strength Jewish awareness and practice around the world.

A highlight each year is a traditional group photograph of Shluchim at the front of Chabad’s central headquarterse building on 770 Eastern Parkway.

Shluchim took part in workshops to combat anti-Semitism, synagogue security, counselling and guiding congregations in the aftermath of terror attacks.

Other topics included mental health, relationships and inclusivity for people with special needs.

Thousands of Chabad viewers around the world watched the events, but for organisers, finding a suitable venue gets harder every year due to popular demand.