Jewish shoppers were evacuated from Brent Cross Shopping Centre in north west London after a 21-year-old man was stabbed to death in a fight at River Island store on Tuesday evening.

Witnesses saw a defibrillator being used on a knife victim outside Marks and Spencers.

Footage on social media shows police guiding shoppers from the building which is in the heart of the Jewish community. An air ambulance was in attendance.

After reports that a group of males were fighting and a stabbing had occurred police officers rushed to the scene.

An Apple Store security guard reportedly said, “All the security came straight away, then the police arrived and they closed the whole floor. The police were chasing them to the parking lot because they thought the attacker was there.”

A Jewish shopper told The Jewish Weekly, “At first my mum and I did not know what happened but rumours circulated. To hear a stabbing occurred at Brent Cross is really frightening.”

Chief Superintendent Sara Leach heads up policing in the area. She said, “My thoughts are with the loved ones of the young man who has been killed in this incident. I would like to offer my thanks to the members of the public who came to his aid. They showed considerable courage.”

Chief Superintendent Leach added,“Two people have been arrested and an investigation is already under way. We will do all we can to identify and bring to justice those responsible.

“The public can expect to see a heightened police presence in the area through the rest of this evening and in the days to come.”

Anyone with information should telephone 101, reference CAD6136/04MAY.

Information can also be provided to Crimestoppers, anonymously, by calling 0800 555 111. 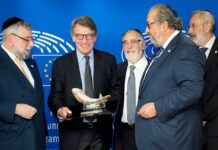