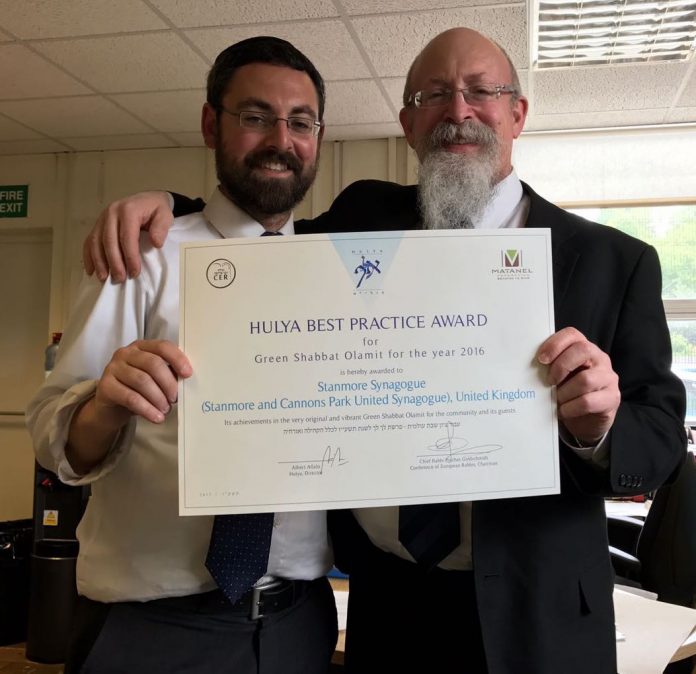 Stanmore and Canons Park Synagogue has a history steeped in tradition.

One of the United Synagogue’s jewels in Anglo Jewry, its community was the largest in Europe a few years ago, resulting in a spot in the Guinness Book of Records.

A trailblazer in terms of shul services, members enjoy a wide range of social, cultural and educational programmes alongside an exemplary community care facility.

Manchester-born Rabbi Mendel Lew grew up in London and has been senior minister since 2006.

“I’ve always liked leading services and after my bar mitzvah regularly took a six-mile [walk] round trip to assist once-large communities with a minyan, where I’d daven and lein,” he recalled.

“This experience was possibly the planting of a seed to become a rabbi.”

While studying at yeshivah in Israel, he stepped in to teach Jewish Studies classes for teachers who were away on reserve duty in the Israeli Defence Forces. And after receiving semichah in 1987, further Jewish Studies followed in New York and then Minnesota, where he was also an educator.

Following his marriage to Rivky (the couple has eight children), Rabbi Lew was offered his first rabbinic post at St Anne’s Hebrew Congregation in 1992.

“I had a vision that everybody would ask for advice, but this wasn’t the case,” he said.
“Every shul has traditions, so you need to feel your way in at a smaller community. You learn that however small a community is, it’s not insignificant.
“A community might be small in number, but it is significant because everyone needs attention in times of joy, grief, or if they are having a tough time.

“St Anne’s was supposedly an older community, yet around 50 children attended our cheder, which was remarkable. Then at Southend & Westcliff Hebrew Congregation, another so-called older community, a third of families had children growing up so we experienced a decade of growth and excitement.

“I was also very fortunate to have a great team of lay and religious leaders at both shuls.”
After fourteen years of serving communities by the seaside, Rabbi Lew moved inland to the biggest Jewish community of the US family at the time.

The congregation serving Stanmore, Canons Park and neighbouring districts came about in the aftermath of World War II with a demographic shift of the Jewish community towards northwest London.

Following its establishment by ten gentlemen who met at the home of Mr & Mrs D Creighton, 76 Howberry Road, Canons Park, on 17 July 1946, services took place at the Howberry residence and then at a British Legion hut at the top of Merrion Avenue.

Dayan Dr I. Grunfeld consecrated the current building, which was opened by Isaac Woolfson, in March 1951. The community centre was consecrated twelve years later.

Membership exponentially grew under the guidance of Rabbi Avrom Chaitowitz and then Rabbi Dr Jeffrey Cohen, backed by various lay leaders, and the addition of a first dedicated assistant minister, Rabbi Andrew Shaw, who provided ground-breaking work for youth and young families.

So was Rabbi Lew daunted about joining a shul when on High Holy Days a few thousand people would come through its doors?

“I’d led a large community because Southend was five times the size of St Anne’s, who had over 200 families,” Rabbi Lew explained.

“Stanmore had 2,000 families at the time so I knew I’d be dealing with enormous tasks. There was very little free time and you are always on call.

“Stanmore was a London community, so you have to be competitive as there were more shuls in the vicinity, but the biggest challenge was coming to a very successful community with a tremendous amount going on and a rich history.

“Rabbi Cohen had been senior minister for 20 years and was a much-loved rabbi, so replacing someone of that stature was going to take time.

“Everyone was welcoming, and I was assisted by a Stanmore legend in Rabbi Shaw who was renowned for his excellent plays on Jewish themes.

“You have to move forward, and we’ve continued to remain relevant to members in providing a quality service.

“I’m one of the images of the shul, but we’ve a tremendous team that keep the community active.”

Rabbi Lew added, “There was a core community group, but over time you bring new people on board because the demographics change.

“Of course there are older members as it’s an established community, but we also have a tremendous number of young people at the shul.

“On a Shabbat morning there is a fabulous amount of toddlers and children, but the challenge is to keep them coming after bar and bat mitzvahs. And it has become harder attracting people to shul, but the question remains why that has happened.

“There has been much debate about the Jewish schools’ admissions procedure [CRP, certificate of religious practice], and my view is that if children are coming in, even if it is just to tick a box, then good, but we have to give them a reason to stay longer.
“To some degree we have been successful but it is an ongoing battle.

“It is up to us to make shul relevant once youngsters come through our door, but getting them in is a big challenge. However, it’s not a negative challenge; we recognise the issues and will not admit defeat.

“If someone comes to my shul, even if they don’t come back I want them to enjoy it rather than feel it’s the same old service, so why return.

“We have to keep shul exciting and as fun possible, and we do a pretty good job of it.”
In terms of Shabbat services, Stanmore holds a traditional main service, monthly Limmud and Sephardi services, a quarterly women’s learning experience and a range of children and youth programmes.

Rabbi Daniel Fine, a keen sportsman and gold-medal winner at the JCC Maccabi Games in his youth, joined the shul in July 2016 and assists Rabbi Lew in serving congregants.
Rabbi Fine and his wife, Janine, have four children and run numerous activities.
Completing the rabbinic team is Rabbi Melvyn Bloom who, amongst a range of duties, conducts a Mishnah study circle and officiates on High Holy Days.

Jonny Turgel, a regular soloist with the much-acclaimed Shabbaton Choir, was appointed chazan at Stanmore in January 2011.

“We provide educational initiatives for our youth, young families and adults, whether it’s shiurim, bringing guest speakers in for social or educational events, or major initiatives such as our Purim or Shabbat UK programme,” Rabbi Fine explained.

Stanmore was one of two shuls to scoop a European award for its Shabbat UK programming.
Popular among members have been challah bake events and educational trips.
Another hit for the shul was when 170 members attended shiurim by seven different speakers at seven members’ homes on the topic of Shabbat.

Future events for young families include a weekend away and a five-week art ‘n’ crafts “Havdalah jam” on a Saturday night.

“There is so much going on in the community,” enthused Rabbi Fine.
“We want to keep the community together whilst running programmes for different ages, so diversifying is an ongoing exciting challenge.”

“Rabbi Fine is coming up with brilliant educational ideas to bring more people in,” Rabbi Lew said. “They are not heavy on the religious side but are very important.
“We also have very good creative thinkers.

“Les Miserabbis [produced by David Coleman] was a huge hit with members and also on the Internet, with requests around the world from shuls to run their own show. Stanmore’s Got Talent was also a hit, and other cultural events continue to excite the community.”

He added, “Keeping people Jewish is our first priority. Davening and learning is the ultimate, but we want members to feel happy being Jewish so are continually looking at ways to achieve this. The future is bright but it’s not without challenges.

“Our job is to engage people, because anyone can watch the greatest rabbis on YouTube so we have to click into the minds of members and keep our embracing brand relevant.”
When it comes to preparing addresses, Rabbi Lew adapts for the occasion.

“When I first came to Stamnore, I tried to get a feel of the community and wondered what they want to hear,” he explained.

“You have to package it, make it topical around a morale Torah message.
“Maybe it’s something in the news or something that has happened to me personally. You let a topic develop in your mind and it naturally comes together.

“There has to be a meaning to a sermon so every simchah is personal, but if the community expects something controversial then so be it.”

As for his teen highs of leining, Rabbi Lew still prepares as if it was the first day he leined from the Torah in 1978.

“I don’t want to lose my edge, whether its davening, speaking or engaging with people.
“No rabbi is perfect, but my motto in life is whatever you do, put everything into it.”
Rabbi Lew was keen to pay tribute to the unsung heroes behind the scenes at Stanmore shul, especially the Stanmore Synagogue Community Care team.

“As rabbi you cannot be everywhere, and I’m very fortunate to have an exceedingly good lay team across many areas who put their heart and soul into our community,” he explained.
“The SSCC team is a shining example, and many communities model their care services on ours.

“We have a tremendously dedicated team trained in counselling and bereavement. They are professionally trained individuals available for people in the most trying of times and offer different methods of support.

“Without these lay individuals, other parts of the shul would not function properly.
“I am proud to lead my shul and be a part of it; our future is bright so long as we keep up our energy levels and rise to the challenges of the 21st century.”