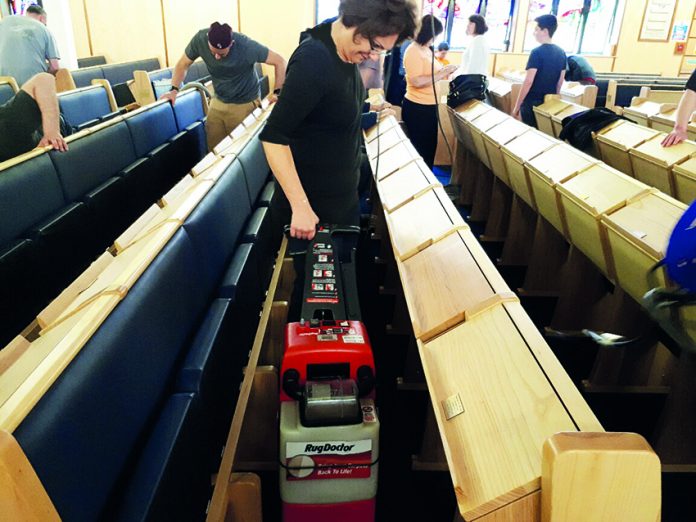 It was all hands on deck – or rather to the floor – on Sunday morning at Stanmore shul, after an overflowing drain flooded the main shul at the end of Shabbat.

By the time the flood was discovered on Motzei Shabbat, two-thirds of the men’s section of the main shul – which was built in 1953 and underwent a complete refurbishment just three years’ ago – was submerged under centimetres of water.

A tap had been left on in a small bathroom behind the main shul, with the water running into what turned out to be a blocked drain. It left the carpet completely saturated and all the woodwork – including the smart new pews – sitting in pools of water.

Immediately the community swung into force. By 7am the next morning a team of more than fifty volunteers had started to arrive, bringing towels, manpower and some industrial VAX machines. The team laboured throughout the morning, managing to reduce the residual water significantly. By the time US CEO Steven Wilson stopped by to inspect the damage, the carpet was still wet but not sodden and hundreds of towels were hanging out to dry over chairs in front of the shul. The colourful display must have had some of the non-Jewish neighbours speculating which festival they were now celebrating.

An online rota was set up for the afternoon session, whereby another team of twenty volunteers took turns in driving the VAX machines to soak up remaining moisture. The volunteers were happily sustained by leftovers from the community’s Friday night dinner with the Chief Rabbi, while over 60 senior members of the community were able to enjoy their annual ‘Stanmore Seniors’ lunch in the shul’s community centre just metres away, undisturbed by the drama.

Stanmore Chairman, Merrick Wolman said: “Most of the water drained away pretty quickly. But we were really worried about the residual impact on our beautiful shul. I cannot give enough praise to the dozens of volunteers who, co-ordinated by the heads of our premises and security committees, gave up their time and towels on Sunday morning to minimise the damage.”