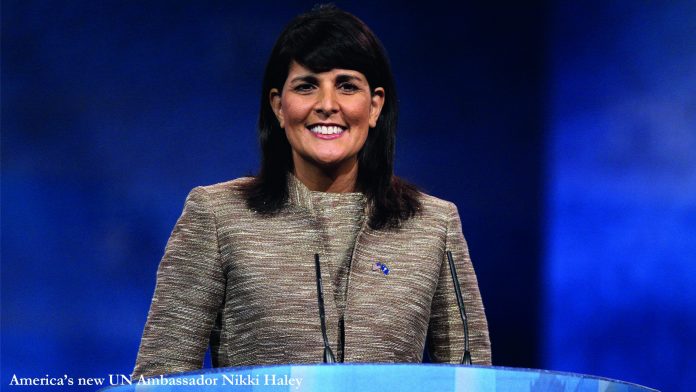 America’s new UN ambassador wowed 18,000 people at the American Israel Public Affairs Committee convention when she vowed to “never again” allow the UN to pass anti-Israel resolutions. Nikki Haley described UN resolution 2334, which stated Israel’s settlements had no legal validity and in which the US abstained, as a “kick in the gut” and warned other UN members that the US would retaliate against any new attempts to isolate Israel. She added: “Never do we not have the backs of our friends. We don’t have a greater friend than Israel and to see that happen was not only embarrassing, it was hurtful.” Haley also referred to Israel’s peace partners, stating that “until the Palestinian Authority does what it’s supposed to, there are no more freebies.” She received rapturous applause and promised that from her new posting in New York she would defend the Jewish state declaring there is a “new sheriff in town”. Ms Haley, who served formerly as governor of South Carolina, said she was taken aback by the “bizarre” level of vitriol she has witnessed against Israel in UN bodies.“I knew they said it was bad, but until you hear it and see it, you just can’t comprehend,” she told the conference. “I’m not there to play and what I wanted to make sure of is that the United States started leading again.” In her short time as ambassador, she has fought against the appointment of former Palestinian prime minister Salam Fayyad as the UN’s special representative for Libya, believing his ascension to the role was a reward from the UN infrastructure for bad behaviour. She also repudiated the UN for the publication of a report that characterized Israel as an “apartheid state,” pressuring its leadership to retract the document. They did so, and its author resigned days later. In addition, she has repeatedly denounced her predecessor’s government for abstaining on 2334.    “Everyone at the UN is scared to talk to me about 2334,” Ms Haley said. “To see that happen was not only embarrassing, it was hurtful. They’re all backing up a little bit – the Israel bashing is not as loud.”  The conference mood this week was upbeat and full of optimism after several years of turbulence and tempered political discourse between President Obama and prime minister Benjamin Netanyahu over Israel’s positions on Iran and expansion of Israeli settlements. President Trump was unable to attend. Mr Netanyahu and opposition leader Isaac Herzog were among the headline speakers from Israel, while ambassador Ron Dermer welcomed the US appointments of ambassadors David Friedman to Israel and Ms Haley to the UN. Mr Netanyahu spoke to the conference via a satellite link from Jerusalem. Mr Ryan praised his colleague for her tough stance, and took his own swipe at the UN for “obsessing” over the Jewish state. He accused the Obama administration of “damaging trust” with Israel and promised a new day under US President Donald Trump – a line which earned him applause from the crowd.  Mr Ryan seemed to endorse two critical pieces of legislation on AIPAC’s agenda. One would target Iran for its non-nuclear behaviour, such as its ballistic missile work and its funding of proxy armies region-wide. It will also officially designate the Iran Revolutionary Guard Corps as a terrorist organization. A second initiative would target international non-governmental organizations (NGOs) if they choose to boycott or divest from Israel in a discriminate manner.  He was particularly critical of the nuclear deal brokered between world powers and Iran in 2015, which he characterized as an “unmitigated disaster.”  The agreement provides Tehran with a “patient pathway to a nuclear weapons capability” even if they abide by its terms, Mr Ryan warned. Washington’s largest Israel advocacy lobby was seeking to reinforce its wide base of bipartisan congressional support, which was clearly damaged after taking on President  Obama over the nuclear deal. At last year’s conference, several Democratic leaders faced an unreceptive audience or simply failed to attend over the Iran deal.  AIPAC officials now hope to leave those difficult years behind and prove once again that its event is a rare bipartisan gathering in the US capital. Tehran has warned the US against passing any old, nuclear-related sanctions under a different name, claiming that such a tactic would violate the nuclear accord, formally known as the Joint Comprehensive Plan of Action.