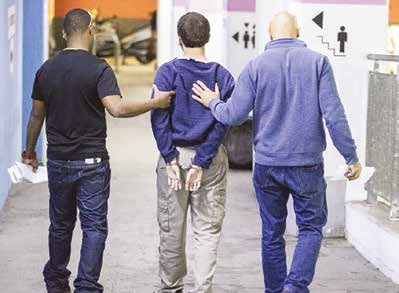 The Israeli-American teenager suspected of making hundreds of threats to Jewish institutions around the world was indicted in a Tel Aviv district court this week after Israel denied a US extradition request.

The 18-year-old suspect, whose name remains under a gag order in Israel, has also been indicted in the United States for 28 counts of threatening phone calls and cyberstalking. The suspect is also wanted in Israel for a variety other offenses including making threats, assault and attempted weapons theft stemming from an attack on a female officer during his arrest, and a litany of other charges.

Authorities say the suspect used an underground web network for a variety of illegal operations including drug dealing, document counterfeiting, and sale of materials for explosives. The suspect also allegedly ran a harassment-for-hire business and was responsible for threats against a number of airline flights, which caused major travel disruptions. The indictment with the Tel Aviv court also alleges that the suspect attempted to blackmail a Delaware state senator and used a shipment of drugs to damage the official’s image. According to the indictment, the suspect targeted Republican state senator Ernesto Lopez after the senator spoke out against the wave of bomb threats, sending a shipment of drugs to Lopez’s residence in a blackmail scheme.