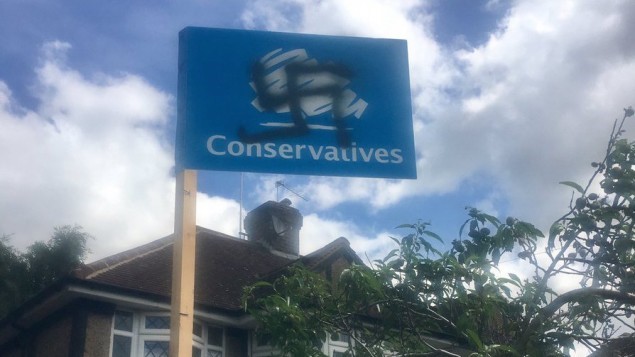 Police opened an investigation into Conservative Party election material being spray-painted with the Nazi symbol just before polling day last Thursday. The election placard was seen outside a house in the Richmond Park constituency where Zac Goldsmith was representing the Conservatives.
Mr Goldsmith resigned from the Tories after their decision to expand Heathrow airport, which he bitterly opposed. He stood as an independent in a bi-election last year but, in a dramatic result, lost to Sarah Olney from the Liberal Democrats.
The local Conservatives forgave him and he was allowed to stand again, this time narrowly winning back the seat with just 24 votes.
Zac Goldsmith, whose grandfather was Jewish and in fact built the King David hotel in Jerusalem, was targeted as a “Jew” during the London Mayor election, in which he lost to Sadiq Khan. Goldsmith tweeted last week: “Lots of you have emailed me about defaced posters in the last few days. We will make sure to replace all of them. You know you’ve lost the argument if you have to resort to stuﬀ like this.”
Nazi swastikas were also daubed on the posters of Conservative candidate Sheryl Murray, who stood for re-election in Cornwall South East and won with a majority of more than 15,000.
Ms Murray said she was “sickened by the daubing of swastikas” and reported it to Devon and Cornwall police, who conﬁrmed the incident was reported as criminal damage.