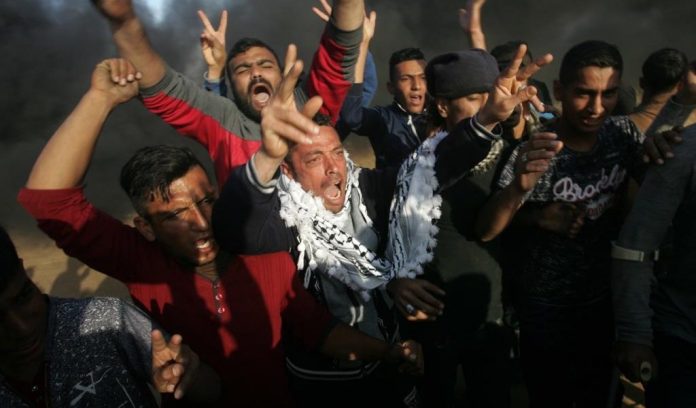 Tension remains high on the Gaza border following several disturbances over the weekend with dozens of demonstrators approaching the security fence.

According to Palestinian sources, one Palestinian rioter was injured by live fire yesterday, whilst in another incident the IDF arrested two unarmed Palestinians who crossed the Gaza security fence and entered Israeli territory. Both men were taken in for questioning.

The IDF also revealed yesterday that it had discovered a bag that was placed adjacent to the security fence during the violent riot on Friday. “The bag was filled with ready to load firebombs aimed at harming IDF soldiers. This is further proof that the violent riots are an attempt to camouflage terror and intentions to carry out terror attacks against IDF soldiers and Israeli civilians,” the army said.

On Sunday 400 Palestinians arrived in four different locations near the border fence. In six cases, IDF opened live fire directed at their legs and arrested three unarmed Palestinians who crossed the border.

On Monday, the IDF rejected new allegations of unlawful use of force against unarmed Palestinians during Friday’s protests. Palestinian news agency Ma’an reported that a 17thPalestinian, 29-year-old Fares al-Ruqab, died of injuries sustained to his stomach from IDF fire during Friday’s violent protests.

IDF Spokesman Brig. Gen. Ronen Manelis said that all those killed during Friday’s riots were engaged in violence. It was “not a nonviolent protest. It was an organised, Hamas act of terror using civilians as a cover. All the fatalities were aged 18-30, several of the fatalities were known to us, and at least two of them were members of Hamas commando forces,” Manelis said. Eleven of the 17 killed have since been identified as members Hamas military wing or Islamic Jihad.

Israeli troops prevented a mass breach of the border fence and an attempt by Hamas to “drag us into a catastrophe. Israel will not allow a massive breach of the fence into Israeli territory,” Manelis added.

Hamas leader Yahya Sinwar visited protest tents on the border Sunday and told protesters: “We have come here to say that Hamas is not sitting in palaces or in tunnels, we have come to say that we are with you. We are here to remind that there is no peace with the enemy and any attempt or plan will not compel us to make peace with them.”

Protest organisers have said mass marches would continue until 15 May, Israel’s 70th anniversary and mark by Palestinians as “Nakba” (catastrophe) Day.