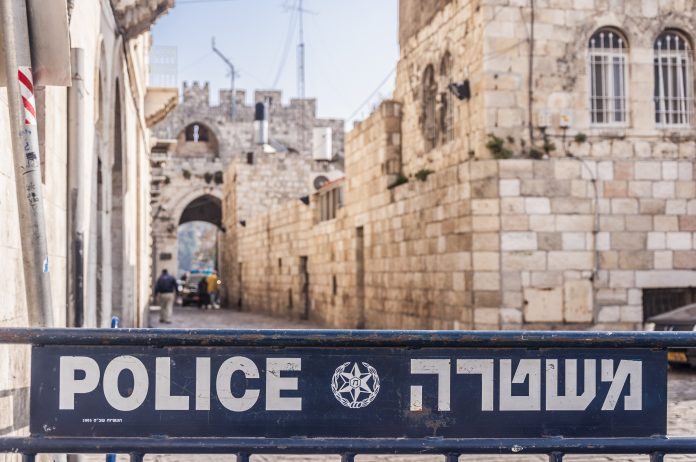 Dozens of Palestinian Muslims attacked police with stones and bottles on Tuesday evening outside the Temple Mount’s gates just after the end of prayers in protest of the additional security measures being taken at the entrance to the holy site.
Israel set up metal detectors and security cameras at the entrance to the Temple Mount after three Israeli Arab terrorists were able to smuggle firearms into the area, using them to carry out a terror attack on Friday that claimed the lives of two Israeli police officers.
Protesters have been demonstrating each night since calling out “We will sacrifice our lives for al-Aqsa,” and “We will die as martyrs.”
Others chanted “There will be an intifada,” and “There’s nothing like killing soldiers.”
Fatah in the West Bank have called for a Day of Rage on Friday in an unusual show of solidarity with Hamas in the Gaza strip, when up to 100,000 Palestinians are expected to attempt to pray at the Temple Mount, known in Arabic as Haram al-Sharif.
Israel Police and Border Police forces once again dispersed the rioters after the protesters received support from the third -largest Arab political party in the Knesset. Members from the Arab Joint List arrived at the Lions’ Gate to join demonstrators in evening prayers outside the Temple Mount complex.
The protestors are refusing to go through the metal detectors, insisting it is against their human rights. It is worth noting that Jews also have to go through metal detectors when entering the Western Wall area.
Members of Knesset are still forbidden from entering the Temple Mount area, whether they are Jewish or Muslim, to avoid sparking further tension. But Arab MKs Hanin Zoabi, Jamal Zahalka, Ahmad Tibi, Osama Sa’adi and Juma Azbarga clearly knew they would be raising the tension and provoking the potential dangerous situation.
“The metal detectors must be removed – they cause great unrest and in fact create a new reality that hurts the status quo,” said MK Ahmed Tibi, who chairs the Joint List’s Al-Quds Committee.
Speaking to reporters, Tibi blamed the unrest on Prime Minister Netanyahu and accused him of the provocation saying “He will bear the responsibility to any escalation here or in the region. The entire Arab world is up in arms. In addition to hurting the Palestinian people, this is hurting Jordan’s special authority over the holy places,” he said.
MK Zoabi, who when last at the Lions Gate spat in the faces of Arab policemen, calling them traitors, then jumped in to stir up the already tense atmosphere on Tuesday evening. “I don’t know how exactly people can tolerate such a situation, in which they pray under siege by dozens of police, Special Forces and military,” he said.
“This isn’t just an occupation, it’s also humiliation. We won’t accept the new arrangement of electronic gates. We refuse any new security arrangement. We don’t need security in our place.”
Earlier Tuesday, the military wings of the different Palestinian factions in Gaza held a press conference threatening a forceful response if Israel does not remove the added security.
“The aggression against al-Aqsa will be the spark that ignites the blaze that can burn through the whole region,” one Gaza militant threatened.
Police used stun grenades to disperse the rioters on Monday evening as hundreds of worshippers clashed with police. Several protesters were injured and treated at the scene.