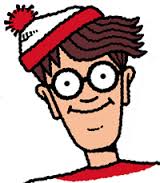 By Rabbi Arnold Saunders
A few years ago, there was a very popular pastime. It was called “Where’s Wally?” This involved looking at a cartoon in a newspaper, magazine or even on a tee-shirt or tablecloth and attempting to find the very small figure of ” Wally” among literally hundreds of people in the drawing.
I know it gave me a particular sense of achievement when I managed to actually find him.
I believe you can still get hold of such cartoons today but they are not so widespread ( I suppose you could say that you have to find “Where’s Wally?” before you can find Wally himself).
of course, the more detail in the drawing, the harder it was to find Wally.
The Book of Esther could literally be named “Where’s Hashem?”  There is much detail in the Megillah. But interestingly, not once is Hashem mentioned by any of the accepted names we use for Him.
Cynics and non-believers could argue that there is no need for Hashem to “make an appearance” in the Megillah as none of the events involved him in anyway.
However, it is our job to “find Hashem”. He is indeed there, but in the background  It is His hand that co-ordinates everything behind the scenes. it is His hand that ensured Mordechai overheard the conversation between Bigthan and Teresh who were plotting to commit regicide. It was Hashem who saw to it that Vashti would disobey her husband and be executed ( It was no co-incidence that she developed a “rash” just before she was summoned to the king).  It was no coincidence that Esther was a good-looking girl. it was no co-incidence that she was orphaned at a young age and was brought  up by Mordechai. There are other such co-incidences, too.
Similarly, we have to “find Hashem” in our own lives.
Purim sameach