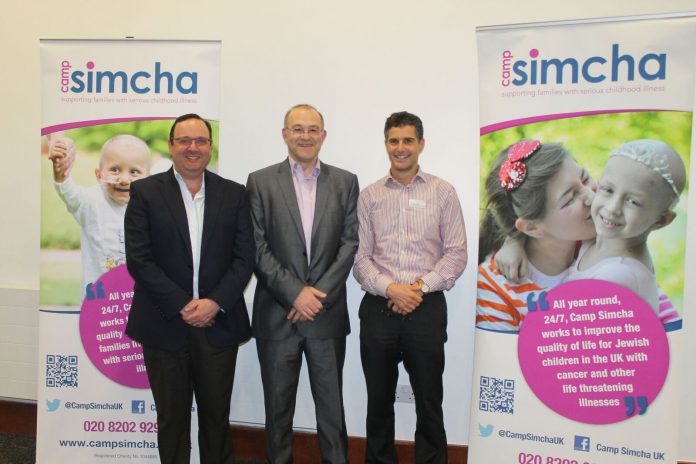 Families with young Crohn’s or colitis sufferers heard there is hope for improved treatment options at an information evening organised by Camp Simcha and Jewish Digest.

Camp Simcha, which supports families coping with serious childhood illness, has partnered Jewish Digest, the Crohn’s and ulcerative colitis charity, to improve the information and support available for young sufferers in the community.

With new data suggesting that inflammatory bowel disease (IBD) is four times more common among Ashkenazi Jews than other members of the population, the audience heard from UCL’s Dr Adam Levine and Dr Elena Schiff who are running an international study into the causes of the condition, with a view to developing new treatment options in the future.

They told the audience at Finchley Synagogue (Kinloss), north London, that they believe environmental factors working on a genetic pre-disposition are at the root of this high frequency of IBD among Jews.

Dr Hyer, also a member of Camp Simcha medical panel, said: “While access to healthcare has made it incredibly difficult to get a diagnosis for your child, once you have one, access to care becomes much easier. You should be able to see someone the day your child has a flare-up.

“With IBD now, the priorities have changed. Now we are very focused on keeping the disease quiet and under control so that it doesn’t give your child a problem in later life. It’s all about the long game.

“We are using existing drugs better now and accessing other drugs earlier, which were used historically for adults. We administer these with more surveillance to manage the doses and side effects and there are also new drugs on the horizon, not to mention new tools we are exploring.”

Dr Hyer added that research on genetics meant that in the future, doctors may be able to tailor medication to work with individual sufferers’ genes.

One member of the audience spoke of the strain her teenage son’s Crohn’s had on the whole family. She said: “He was only nine when he was diagnosed and we then spent the next two years in and out of hospital. We tried various different types of fluid-only diets, steroids a number of times and tried feeding him through a nasogastric (NG) tube.

“It is impossible to describe in words what a nightmare and emotional roller coaster this was for our son and for us as parents, watching him go through procedures he was afraid of, uncomfortable with, or embarrassed to comply with.

“He fell very far behind with his school work, which really didn’t help boost his self-esteem and when he was unwell it took its toll on the family. His siblings were very jealous of the attention he got, the time he had off school, the extra time he had with us, his parents. His moods were challenging, too, and I feared his volatile temperament would upset the happy family atmosphere I had worked hard to cultivate.

“Thankfully now he is in remission but the Camp Simcha-Jewish Digest evening was very encouraging, meeting professionals who are passionate about helping and finding solutions for us.  It felt comforting to be among other parents who were all in the same position, gaining knowledge about how best to cope with the challenges our children are facing.”