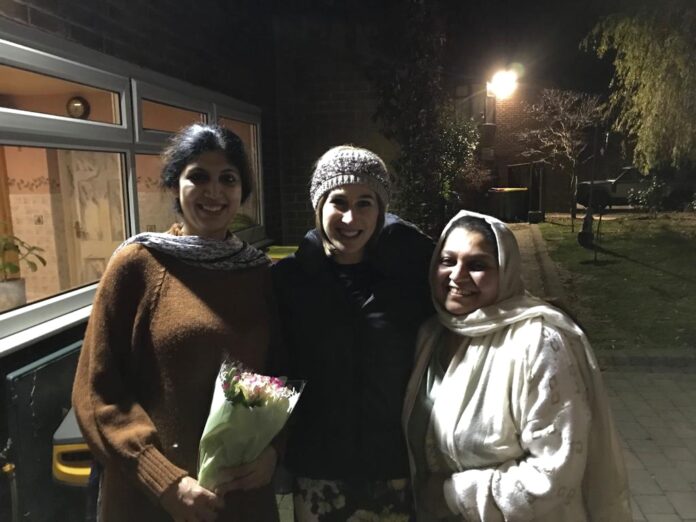 As you know, (or perhaps didn’t) we live during the week in Manchester so that our children can be in school and then pack up and re-locate to St Anne’s for Yom Tov and Shabbos every week to be with our lovely community over there!

My husband also commutes to St Anne’s two/three times a week and on a Friday will get there before me with all the Shabbos food (which I cook in Manchester and package up!), set everything up for Shabbos so that when I arrive in time for Shabbos with the children, everything is ready!

This routine has worked well for over three years, it’s only an hour’s drive away, although I give two and a half hours lea-way, there’s never much traffic as you are travelling to a quieter part of the UK….

A couple of weeks ago (I write this at Channukah time when Shabbos is in the earliest!) I was about half-way through the journey (with still a good couple of hours to go until Shabbos) when up ahead on the motorway, traffic was bumper-to-bumper blocking all three lanes. OK I thought, slowing down, a little congestion, it’ll clear in no time. But as ten, fifteen minutes passed and I hadn’t moved yet, my heart started sinking. My daughter, sitting next to me in the front, became Co-pilot and tried to find alternative routes we could take. I couldn’t get off the motorway as the next junction wasn’t in sight, so we called my husband to let him know what the situation was and to try and help navigate us over the phone.

With about an hour to go to Shabbos we got off the motorway heading in the direction of Preston, two thirds of the way from Manchester to St Anne’s. But hundreds of other cars had the same idea too and traffic was standstill again all the way up the hill to the main road! But at least I was off the motorway…

It took a further half an hour to get onto a main road. Now with less than half an hour my husband called with a P’sak from a well-respected Posek (halachic expert) in London….try to find a residential area, park the car and put the keys in our eight-year-old boy’s pocket! Meanwhile my husband had given our exact location to our incredible non-Jewish next-door neighbour in St Anne’s who had been asked to come and rescue us!

So as shkyia (sunset) was upon us, me and three of our children started our Shabbos Kodesh stranded in a very strange location in Preston, awaiting rescue!

As it was getting darker, so too was the temperature dropping quickly and the wind was biting….so I suggested we all jog on the spot and walk up and down the road a little bit. The last thing I remember my husband saying was ‘If you keep Shabbos properly, this will be the most powerful experience the children will ever be a part of!’…

But we were really freezing now, pacing up and down the road, only about ten minutes into our wait for our neighbour who could be over an hour if the traffic continued the way it was.  We kept walking past a big house, where I could see an Asian lady (looking nice and cosy and warm!) observing us random strangers walk past from her kitchen window.

After making eye contact again for about the third or fourth time, she came out of her house and asked us if we were OK? I explained to her we were stranded and waiting for someone to pick us up. She immediately asked us if we’d like to come in and wait in her house.

My nature is usually never to impose myself on anybody, but I couldn’t let my children be cold any longer so graciously accepted her kind invitation into her home.

We were greeted at the door by her sister in law, daughter, nieces, about five or six ladies and girls came to welcome us in! I explained my car hadn’t broken down, but we had to get out as it was the Jewish Sabbath and because of the unusual traffic situation we hadn’t reached our location yet. The first lady (Firdosh) explained that she had heard on the radio that a lorry had capsized, shedding its load across all three lanes of the motorway which was responsible for the stand-still! She said she knew it was just about to be sunset as they are religious Muslims and it was just about time for the Sunset prayer! There was also apparently a storm on the way causing the sudden drop in temperature and howling wind.

We were brought into a big family room, invited to sit on cosy couches and trays of food and drink were swiftly brought in for us! We were so overwhelmed by this hospitality; it was so surreal and no matter how much I thanked them for the refreshments which we politely declined (explaining about Kosher) they kept bringing more out!

Firdosh asked if we would excuse them whilst they prayed their Sunset prayer! Again, totally overwhelmed by the situation we watched as they ‘davened’ which was not too dissimilar to the way we daven (pray)!

For a while my husband has been involved in Inter-faith work. Once I asked him if I could join an event he was attending as I would like to meet some Muslim women and talk about our common ideals and faith. Now here Hashem was giving me a real experience and opportunity of my own! It was so ironic! Firdosh explained that in their culture, all three generations will live together including brothers and their wives and children and that in their home there were 21 of them! It was very ‘frum’ as all the men and boys were at mosque whilst we were there and apparently, they eat their meals separately, first the men, then the women and children.

We chatted about their enthusiasm for welcoming guests which I agreed was a very important part of Jewish living too called Hachnasas Orchim! We compared laws on Kashrut and Halal and I found here was an opportunity to explain about Chalav Yisorel (kosher milk) so they wouldn’t be offended why we hadn’t touched the tea and hot chocolate they had so kindly brought out for us!

Now onto our neighbour who was so humble and knew exactly what to do re opening car doors for us etc – I told her this was all so bizarre I must write an article about all this one day but she said, ‘Please don’t mention me – I don’t need to be in it!’

All I can say is this special lady is a Tzaddikes Me’Umos Haolam (righteous amongst the gentiles) and I ask Hashem to bless her and her family with everything good, always.

Finally, we got to our Shabbos home where we burst in and told my husband about this crazy story. He joked whilst he was davening Kabbalas Shabbos in Shul we were davening with our new Muslim friends!

Sometimes Hashem puts us in situations where we can see that its not just people we already know, respect and admire who can inspire and uplift us, but people outside our normal day to day personal inter-actions and social circles…this can give us so much hope and faith in mankind, throughout the world, that surely our ultimate Geula (redemption) is drawing nearer, one kind act to another at a time…