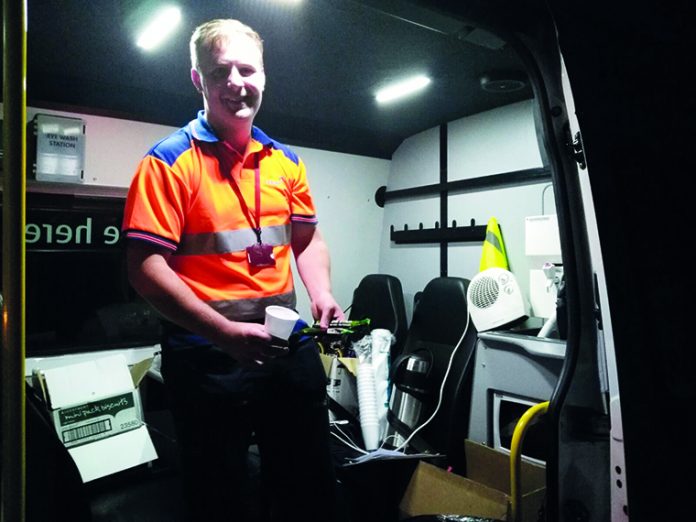 It seems almost surreal as I walk around the pitch-black Golders Green streets surrounding Kay’s superstore late on Sunday evening. 260 properties are without power after the ﬁre, which is still burning after 11pm, wrecked the entire building. The area looks like something out of a war zone. No street or house lights are on, and the ﬂashing blue police and ﬁre engine lights half blind me as I walk around.
Many couples are walking around, and children are seen peering out of upstairs windows with their green glow sticks, given to them by a national power grid welfare oﬃcer, with the ﬂicker of candlelight casting shadows behind them.
I meet one local resident, Zevi Tessler, from Highﬁeld Gardens. He show me his generator, plugged into his car, which was providing power to his entire house. Not everyone was as fotunate, with some people having to store meat in their friends freezers and children going to stay elsewhere as they were afraid of the dark.
One Hatzola member who wished to remain anonymous tells me how he was one of the ﬁrst on the scene at 7.50 in the morning. He spent the day ferrying people to hospital, including a 10-year-old child.
I am immensely proud of how the local Jewish people have helped out so much. One woman was seen handing out tea and coffee, whilst a collection for the ﬁve families who lost all their processions in the ﬁre was so full that the organiser Sara Benbassat had to tell people to not bring anymore until further notice.
Slice owner Avi Schwartz was seen handing out free pizza to the emergency services. He humbly told me that “It was a pleasure to help and I’m sure anyone would have done the same.”
As I end my midnight stroll, I ﬁnd out from the welfare oﬃcer, Sunny, how Jews best respond in a crisis. With a smile, he tells me that he oﬀered free food all day to local residents, but “all they have used us for is to charge their phones in my van!”