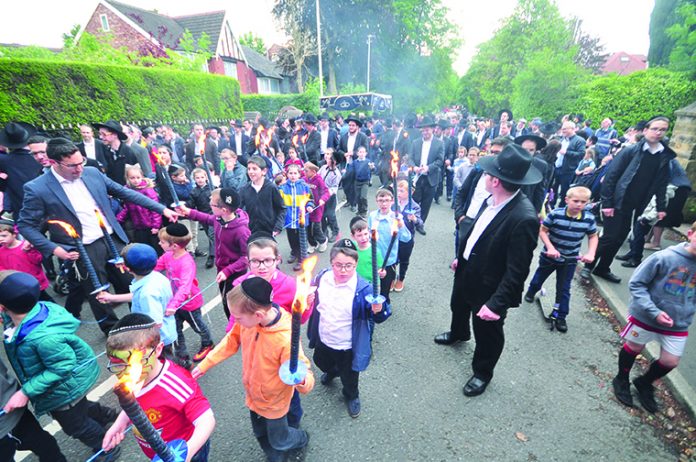 On Sunday afternoon over 3,500 people from across the whole Manchester community joined together for a Hachnasat Sefer Torah written by the Manchester Beth Din in memory of the late Rabbi Yehuda Brodie zt’’l, registrar of the Beth Din for over 40 years.
It was one year ago on the first yartzheit for Rabbi Brodie when Mr Modi Spitzer, an honorary officer of the Beth Din presented the idea of commissioning the writing of a Sefer Torah in memory of Rabbi Brodie. Over the past year, twenty different shuls, organisations and individuals have sponsored a parsha in the new Sefer Torah. Additionally, hundreds of school children from many different schools have joined in this unique community Sefer Torah by purchasing a letter and they each received a certificate.
After the last letter which was written by Mr Moderchai Halpern, there were speeches by Mr Moddi Spitzer who thanked all those who made a special effort to attend, including the Chief Rabbi Ephraim Mirvis, Rav Schneelbalg, Dayonim from the London and Federation Botei Din. The Chief Rabbi spoke first, praising the Beth Din and the Manchester community as one of the jewels in Anglo Jewry. He continued that we find that Eliezer is never referred to by name in the parsha of looking for a shidduch for Yitzchok, he is known as Eved Avrohom, a servant of Avrohom, to be servant is the greatest compliment and Rabbi Brodie was exactly that, he was a servant to the whole kehilloh, helping anyone and everyone at all times.
Dayan Yehuda Osher Steiner from the Manchester Beth Din was the second speaker who expanded on the words of the Sages that tzaddikim (The righteous) are called “Chaim” (life) even after their death. Dayan steiner explained this is not only referring to in Olam habbah, but rather this includes this world as well. Not a day goes by when at the Beth Din, someone says “How would Rabbi Brodie deal with this situation, Reb Yehuda did it like this” etc, two years after he was nifter, he is very much still “Alive”.
The final speaker was Rafi Brodie, a son of Rabbi Yehuda Brodie who compared his father to every aspect of a Sefer Torah, including all the tropp, how his father helped those who were distanced, how he managed to gather in those who were scattered around the community, never giving a break, but rather always finishing the job.
Following the words and the final letter being written, the hachnasat Sefer Torah procession began from Stenecourt shul, down singleton road which was closed to all vehicle traffic, crossing over Bury New Road to the Beis Yisroel shul where it will be used by Misaskim. Rabbi Brodie was a founding trustee of the Misaskim organastion, which he was very instrumental in helping Misaskim in its first few years. When the Sefer Torah entered the shul, hakafot and tefillot were said by Chazzan Muller.
It was a wonderful afternoon full of unity. Despite a rain forecast for the whole afternoon, the weather was beautiful as was the whole atmosphere, together with the lively dancing from all ages joining in.