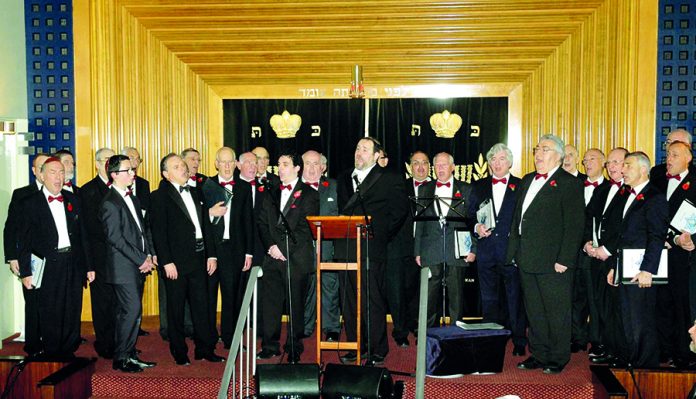 ‘Wembley’ is a place and name globally recognised because of the many sporting and music events synonymous with Wembley Stadium.

The likes of Michael Jackson, Tina Turner, Madonna, Oasis, Guns ‘N’ Roses, The Who, Bruce Springsteen, Simon & Garfunkel to name but a few have played to sell-out crowds.

And the stadium even featured in the opening scene of a movie, The Kings Speech and Cecil Freeman Gregg’s crime novel Tragedy at Wembley (Meuthen, 1936).

Since the stadium reopened in 2007, Wembley has continued to be a mainstay of major events including UEFA Champions League finals, the 2012 Olympic Games, NFL international series and music concerts for Take That, Coldplay, Metallica and AC/DC.
But what do these facts about a historic stadium of excellence have to do with Wembley United Synagogue, which has a Jewish community of 350 members?

Well, if you speak with clergy or congregants there are many a sporting, music or cultural tale of fans dropping into services on route to the famous venue.

After all, an extra prayer at the North London shul might bring a team some good luck in a cup final or pass some time before an unforgettable occasion!

Rabbi Simon Harris has been the shul’s minister for the past decade and sees the trend continuing especially as a certain football club in London is due to play at the stadium next season as White Hart Lane undergoes a complete rebuild.

“Normally when we see someone new we offer an aliyah and who knows we may get some more regulars,” he quipped.

“Jokes aside, Tottenham Hotspur played in the Champions League last season at Wembley so we had extra visitors midweek and they are set to again next season.

“We often get fans rocking up before or after a big match, I’m sure that will continue and they are very welcome.”
Historical records show that a few Jewish families in Wembley gathered to facilitate Hebrew and religious education in 1928. At the time the nearest communities were Cricklewood, Harrow and Ealing. But the movement of Jewish populations from east, north and central London towards the northwestern suburbs had begun, made accessible by fast transport facilities by Metropolitan and railways lines.

Wembley Hebrew Congregation came into being at a meeting on 5 September 1928.
Mr H. Hooberman was appointed the chairman of the congregation, which became affiliated with the United Synagogue in 1931 with a membership numbering just 64.

Services were held initially at festival times at venues including the Union Hall in Ealing Road, Mitchell’s Restaurant in Wembley High Road and the Capital Ballroom in Empire Way.
The Wembley community became a District synagogue by the end of 1934.

The Ladies Guild purchased the first Sefer Torah for the shul five years later as membership rapidly increased up to the outbreak of World War Two.

The coming years would see much discussion about a new site for the shul, which eventually came to fruition shortly before then after the unforgettable ‘Matthews final’ of ’53, when Chief Rabbi Israel Brodie consecrated the new shul on 25 October 1953.

After numerous fundraising efforts, building operations on the new synagogue started in 1956 and a foundation stone was laid on 17 November that year.

Rabbi Harris, who grew up in Cricklewood in the swingin’ sixties, was appointed to Wembley United Synagogue in July 2007.

Educated at Hasmonean School, he read Hebrew at SOAS University of London, followed by six years studying in Jerusalem.

He received semicha from, among others, HaGaon HaRav Yitzchak Kolitz Z’tl.

Rabbi Harris, who is married to Alison, the couple have two children (both third generation Hasmoneans), holds a Masters in Oriental Studies from Oxford University, and is currently occupied with post-graduate research focused on the Redaction of the Babylonian Talmud.
So where did his rabbinical journey start?

“During the 1960s, there were some amazing Chazanim including Yehuda Landenberg,” he recalled.

“It was not a sermon that made me feel frum but another world this man transported us to. “Chazan Landenberg was magical when he davened during Yom Kippur.
“I was very young, but at the same time got this tremendous inspiration from hearing someone put his whole soul into what he was doing. Chazan Landenberg had so much energy, and what a voice he was blessed with, it was incredible.
“Whilst I remember going to Bromdesbury Park Synagogue, mostly I davened at a Chassidishe stiebel called Keser Torah D’Ravzin which Rebbe Beirus Finklesteins ran.
“It was known as Finklesteins and we used to davern in his study but it never occurred to me there were not many people there. There were maybe 20 people, but to me, it was the centre of the universe. It was very special to grow up in such a spiritual environment.
“At yeshiva, I loved hearing Chazan Naftali Hershtik when he was at the height of his powers at the Great Synagogue in Jerusalem. It was a wonderfully uplifting time.”

Rabbi Harris was appointed minister of Bournemouth Hebrew Congregation in May 1990.
“They were a delightful community, were mainly elderly and treated me like a grandson,” he recalled. “I was fortunate though as there were younger families so we did celebrated bar and batmitzvah’s.

“In Judaism you must respect and value experience and age. The congregation was so kind to me, and it was a wonderful way to begin my career.

“We had a great discussion group with some incredibly bright lively minds.
“I learnt so much during this period, every rabbi should work in a provincial community because you do so much, you learn to network and lead a congregation.
“You also learn practically how to do things.”

From Bournemouth, Rabbi Harris took up a post as Chief Rabbi of Ireland.
“Arguably, I left Bournemouth too soon but this chance was too much to resist,” he recalled. “There were around 1,000 Jews, and again I learnt so much. In some ways, it was even more practical in terms of my role than my first posting.”

Rabbi Harris worked at Yakar as director of programmes, a pioneering adult educational organisation in Hendon before a brief spell as Minister of Western Marble Arch Synagogue.
Following an approach from Cyril Harris, Chief Rabbi of South Africa, Rabbi Harris flew to Cape Town to lead the Jewish community of The Great Synagogue.

“This was the mother shul of the country, next to Parliament, elegant and structurally stunning with a beautiful choir,” he recalled.

While in South Africa during the mid-90s, Rabbi Harris met Nelson Mandela, who became president of the Rainbow nation during his tenure.
And this senior statesman made a big impression.

“It was a really exciting time and I met Mandela on a number of occasions,” he recalled.
“Mandela had a great relationship with Chief Rabbi Harris. They got on really well, which was great for the Jewish community.

“Mandela really was an amazing character, there was a karma about him, and he was very much larger than life with tremendous sweetness.

“Considering what he went through on Robin Island, which I visited, to come out after all those years and not be motivated by revenge but rather a desire for reconciliation, it’s a shame there are not more Mandela’s in the world.

“Mandela chose to forgive and move forward, he was an incredible human being and an outstanding personality.”

Rabbi Harris and his family made aliyah, but whilst “feeling at home” studying in Jerusalem, the move did not work out.

After taking up a post as a research fellow at University College London then briefly working at Clayhall Synagogue, Rabbi Harris arrived at Wembley United Synagogue.
The shul has daily and traditional Shabbat services while its Friendship Club puts on a varied weekly programme of musical entertainment and speakers on a wide range of topics.
Rabbi Harris holds a midweek and Shabbat afternoon shiur.

In terms of educational initiatives, Wembley is among three local United Synagogues together with Spanish and Portuguese communities in a cross-communal three-term-a-year educational and cultural programme.

“We are predominantly an elderly community so programmes are tailored,” he said. “We do things at a convenient time for services and initiatives, and my role is hugely rewarding.
“We have full-bloodied shiurim, there is lots of banter, participants are forthright and my greatest pleasure is giving a 90-minute shiur on a Shabbat afternoon.

“I’ve been with my group for a decade and they are my biggest critics. We go into lots of detail, it’s fantastic. They have come on leaps and bounds.

“Sermons are also almost interactive, more like a chatty schmooze, we joke and there is banter but also serious discussion.

“We do have a few youngsters and hold a regular children’s service with an old fashioned kiddush. We also have a core group of frum families so people visiting are always entertained at festivals.”

Rabbi Harris is involved in local civic life especially interfaith activities.
“We do a huge amount of interfaith in the area, which is important for the Jewish community,” he enthused. “Not so long ago, a Jewish old age home welcomed Punjabi dancing.

“Holocaust Memorial Day is always well attended and relations with the council is good.
“We try to build bridges with our neighbours, which is essential in a world where there are mistrust and violence.”

He added, “I’m very proud of my pastoral record and the shul will survive.
“We are an elderly community and if the current trajectory continues we will get smaller but Wembley as an area being transformed so we could well have a renaissance.”
In terms of this renaissance, historic reasons why Jews left the Brent area no longer apply.
Wembley boasts primary and Jewish secondary schools in Sinai and Jewish Free School.
And Wembley is undergoing a major transformation.

Around the famous old stadium, ‘Wembley City’ and ‘Wembley Village’ are being built.
Over 100 designer outlets, cinemas, play areas, walkways, water fountains and fresh grass verges sit amongst a flourishing new centre with all grades of hotels and banqueting facilities.

“I would not be surprised if our community regenerates because locations can be cyclical,” Rabbi Harris enthused.

“Wembley is a great area so as are other Jewish neighbourhoods in North West London fill up, youngsters might say, why not Wembley?

“I hope more families come to live here again as I’m committed to looking after them.”