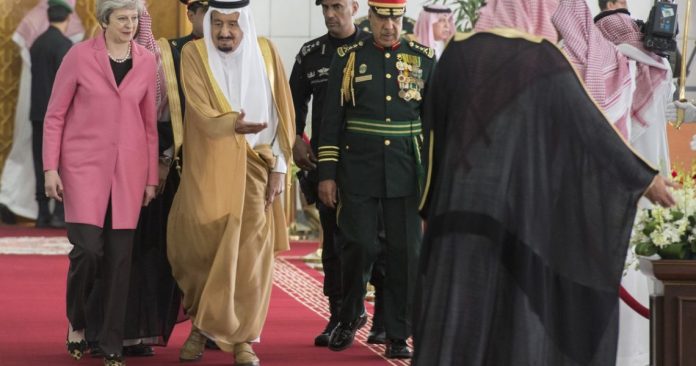 British Prime Minister Theresa May arrived in the Middle East earlier this week for a three day visit to Jordan and Saudi Arabia aimed at strengthening links with trading partners as Britain makes plans to leave the European Union.
The Prime Minister’s spokesperson said that the visit “demonstrates that, as the UK leaves the EU, we are determined to forge a bold, confident future for ourselves in the world. We must look at the challenges that we and future generations will face and build stronger partnerships with countries that will be vital to our security”.
May will meet Saudi Arabian Crown Prince Mohammed bin Salman today, with the diplomatic spat with Qatar and the vhumanitarian crisis in Yemen expected to be high on the agenda.
Speaking to a group of journalists ahead of the visit, May said she was “concerned about the humanitarian situation in Yemen. We are very clear that we want to see full humanitarian and commercial access through the port of Hodeida – and that’s obviously an issue I will be raising when I am in Saudi Arabia”.
May is meeting this week with Jordan’s King Abdullah and Prime Minister Hani Al-Mulki to assess how Britain can support the Jordanian economy and ongoing efforts to defeat ISIS. More than 3,000 UK service personal are currently involved in training the Jordanian armed forces.
A British Government spokesperson said: “Jordan’s continued security, stability and economic sustainability are central to a peaceful future in the Middle East and are clearly in our mutual national interests”.
King Abdullah of Jordan was in Washington yesterday for meetings with US Vice President Mike Pence and National Security Adviser H R McMaster. King Abdullah also discussed efforts to revive the Israeli-Palestinian peace process and the Syrian War with Jared Kushner and Special Representative for International Negotiations Jason Greenblatt.
King Abdullah warned Greenblatt and Kushner that “failure to reach a just and comprehensive solution to the Palestinian cause will fuel further extremism and violence in the Middle East”.`