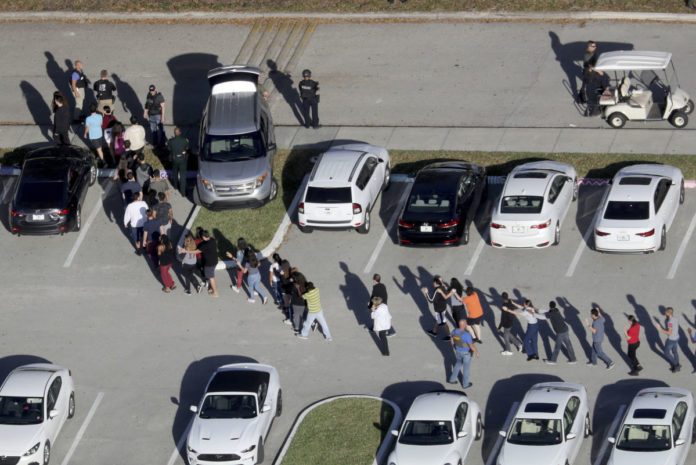 Thousands of mourners attended the funerals of Jewish victims of the Marjory Stoneman Douglas High School massacre in Parkland.
Four Jewish students and a Jewish lecturer were among 17 people killed by Nikolas Crus last Wednesday.
Teenagers Meadow Pollack, Alyssa Alhadeff, Jamie Guttenberg, Alex Schachter and Geography teacher Scott Beigel lost their lives in the latest gun tragedy to stun America.
Mr Beigal died whilst ensuring students took shelter in his classroom and in the immediate television coverage students told CNN how his actions saved their lives.
Governor Rick Scott met with Chabad rabbis who serve the Parkland and Coral Springs communities to discuss initiatives in response to the tragedy in a private meeting on Monday.
Govenor Scott asked for their thoughts to bring “moral values into the school,” Rabbi Yankie Denburg of Coral Springs told lubavitch.com.
Rabbis proposed a ‘moment of silence’ at the start of a school day offering a space to reflection. They also suggested creating ‘CLUB17’ in honour of the victims to promote thoughtful messages and a ‘Wall of Goodness’ buddy system for older and younger students.
Rabbi Denburg said that the meeting was a call to action; the Governor was receptive and took notes.
Rabbis Yankie Denburg, Yossie Denburg, Avraham Friedman, Yossi Biston, Shuey Biston, Moshe Rabin and Hershy Bronstein together with their families have been on hand for anyone impacted by the tragedy.
“We need to deal with the fundamental moral void and emotional darkness that currently exists and is causing so much violence and suffering,” Rabbi Denburg added.
At the funerals there was fury among mourners who called for more stringent gun controls. Thousands of students, parents, teachers and residents participated in a rally in Fort Lauderdale to vent their anger in the aftermath of the tragedy.
President Donald Trump, despite being a strong supporter of gun rights and the National Rifle Association, offered support for calls to strengthen federal gun background checks.
As survivors stated they would become the “voice” of reviving gun control movement, Trump agreed to hold a “listening session” with an unspecified group.
Trump criticised the FBI for missing signals of Cruz’s intentions, arguing agents focused more on attempting to prove “Russian collusion” during his successful presidential campaign earlier this week.
As for the suspect, Cruz appeared in court with his lawyer stating he would plead guilty to killing 17 people if the state agrees not to seek the death penalty.
There seems certain to be further repercussions in the coming days and weeks.
Around 40 percent of students are Jewish at the Florida school.