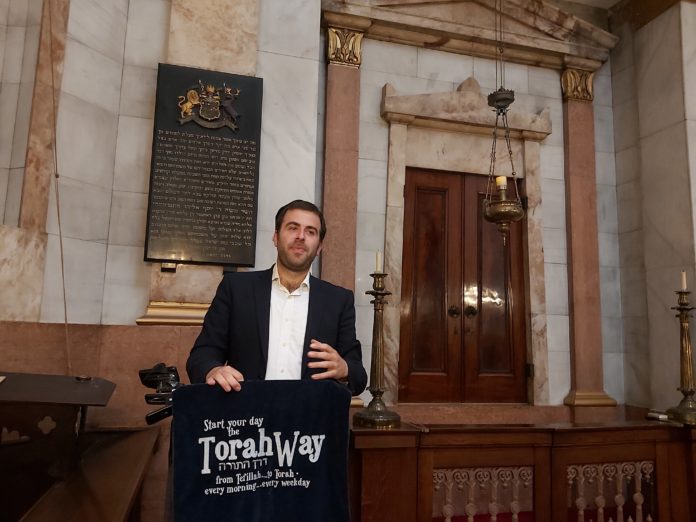 Start Your Day the Torah Way NW London ended their unbroken annual series of inspiring daily shiurim, 6 days per week, with a meaningful final shiur, set in a permanent clearing in the woods of a British county in Southern England, in the magnificent Shul of the late Sir Moses Montefiore on his Yahrzeit.

Set back from the road, up on a hill which is beautifully lit up at night, is the permanent tribute to this ultimate askan, Sir Moses Montefiore. Annually, Maggid Shiur in the Montefiore Kollel, Rabbi Amrom Nemeth, arranges a Minyan in Ramsgate to commemorate Sir Moses’ colourful life and pay tribute to his role in not only building Anglo Jewry but also literally building and supporting people and places in Eretz Yisroel.

To an invited audience, duly masked and socially distanced, Rabbi Nemeth regaled his captured audience with a fascinating insight into the life and times of Sir Moses, who, whilst juggling the challenges of askonus, showed his devotion to Torah and Mitzvos, particularly kashrus and tzedokah and his unflinching support of Torah learning: the Montefiore Kollel was situated a stone’s throw from the Shul and continues to this day in London. Indeed, there is something in the air surrounding this edifice which still carries the sweet echoes of that Limmud HaTorah.

Like a sentry guarding its palace, next to the Shul lies the Kever of Sir Moses and his wife Lady Judith. Built in the style of Kever Rochel which, Rabbi Nemeth told us, Sir Moses also built, this shrine encompasses the tombs of a unique couple who not only remained steadfast to their Mesorah, but established the foundations of a heritage that still supports Jewish education and Torah learning to this day.