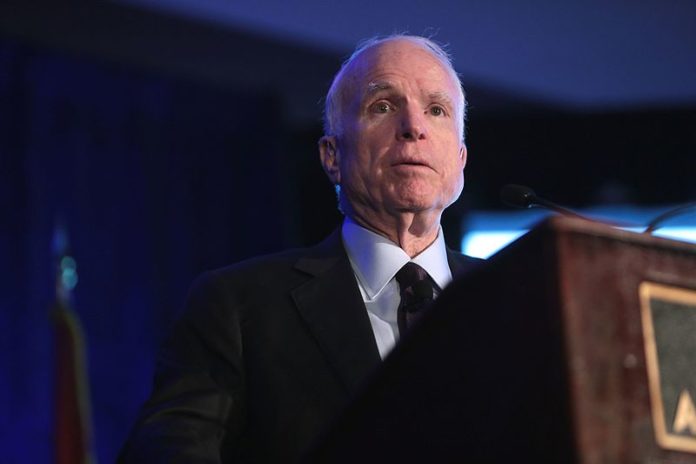 Prime Minister Benjamin Netanyahu has led tributes from the Jewish world to US Senator John McCain following the announcement of his death on Saturday.
Recalling his friendship with the 81-year-old Vietnam veteran who died after a year-long battle against brain cancer, Netanyahu said McCain “never waivered” in his support of Israel.
“‏I am deeply saddened by the passing of a great American patriot and a great supporter of Israel,” he noted on Facebook.
“I will always treasure the constant friendship he showed to the people of Israel and to me personally. His support for Israel never waivered. It sprang from his belief in democracy and freedom.
“The State of Israel salutes John McCain.”
President Reuven Rivlin said McCain was a “great leader who defended his nation, a man of strong values and a true friend of Israel.”
Defense Minister Avigdor Lieberman recalled McCain as one of Israel’s “greatest friends”.
Yair Lapid, head of opposition Yesh Atid Party, praised McCain as “a soldier with integrity in a world of politicians.”
World Jewish Congress head Ronald Lauder paid tribute to a “towering figure” of American and international politics.
“He dedicated his life to serving his country both as a heroic soldier and, of course, as a prolific senator,” noted Lauder.
“Throughout his career, he worked tirelessly on behalf of the American people, sticking by his principles for a better country and a better world.
“He was also a reliable friend of the State of Israel and a great supporter of the Jewish people.
“John McCain was a unique and inspirational leader, the likes of whom we are unlikely to see again. Our thoughts and prayers are with his family.”
A dedicated Republican fierce, McCain, known for his no-nonsense democratic values, was a fierce critic of President Donald Trump on numerous issues including what he called Trump’s “zero-tolerance” immigration policy and performance as President at a summit in Helsinki with Putin.
Trump failed to mention McCain when he signed the John S. McCain National Defense Authorization Act, earlier this month.
Following the announcement of McCain’s death though, Trump did tweet condolences.
“My deepest sympathies and respect go out to the family of Senator John McCain. Our hearts and prayers are with you!” he wrote.
Trump however caused consternation among McCain followers when the flag over the White House was raised early after being lowered as a mark of respect.
The flag was later raised, after complaints.
Trump is not expected to speak at McCain’s funeral.
Past presidents offered heartfelt condolences to the McCain family after the Arizona Republican senator’s passing.
McCain twice stood for the presidency in a 35-year political career, losing out to George W. Bush and
Barack Obama.
Bush said McCain was a man of “deep conviction and a patriot of the highest order.”
“Some lives are so vivid, it is difficult to imagine them ended. Some voices are so vibrant, it is hard to think of them stilled,” he noted in a statement.
“He was a public servant in the finest traditions of our country. And to me, he was a friend whom I’ll deeply miss.”
Obama tweeted that he and McCain were “members of different generations”.
He wrote, “We came from completely different backgrounds, and competed at the highest level of politics but shared, for all our differences, a fidelity to something higher — the ideals for which generations of Americans and immigrants alike have fought, marched, and sacrificed.”
During the historic McCain-Obama 2008 campaign there was a standout moment when McCain responded to a voter who told him she couldn’t trust Obama because he was “an Arab.”
Shaking his head in disbelief at the racist comment,
McCain said, “No ma’am, he’s a decent family man and citizen that I just happen to have disagreements with on fundamental issues, and that’s what this campaign’s about.”
Obama recalled, “(We) saw our political battles, even, as a privilege, something noble, an opportunity to serve as stewards of those high ideals at home, and to advance them around the world.”
Former President Bill Clinton recalled McCain as “a skilled, tough politician”.
He added that McCain was as “a trusted colleague” of his wife New York Sen. Hillary Clinton who “was honored” to serve alongside him in Congress.
“He frequently put partisanship aside to do what he thought was best for the country, and was never afraid to break the mold if it was the right thing to do,” said Clinton.
In his memoir, “The Restless Wave,” McCain wrote that he had no regrets about his life and hoped to be a “small place” for himself in the America story.
Born in 1936 in the Panana Canal zone, he followed his father and grandfather into the Naval Academy.
McCain endured solitary confinement and torture at the hands of his captors during years of imprisonment after his 23rd bombing round over North Vietnam.
He refused early release, realising it was a propaganda tactic, insisting those captured first should first be set free.
Writing about his war ordeals, he attributed his survival to his father, due to his military standing.