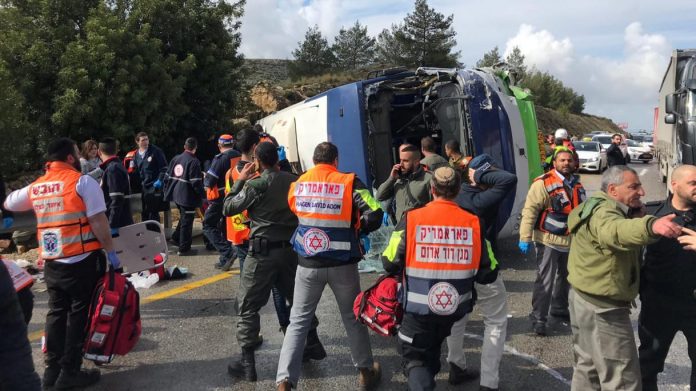 Two women died and 51 were injured when a bus overturned after crashing into a stationary rescue vehicle on Route 443 near Modi’in on Sunday morning.

Rachel Gutman, 29, from Modi’in Illit, and Ruchama Rosen, 27, from Jerusalem were named as the fatalities.

The Kavim Company’s 304 line bus was heading from Modi’in to Jerusalem when the incident occurred close to the West Bank settlement of Beit Horon.

According to police, the Ford rescue van driver stopped near a safety barrier to aid in a minor traffic accident on the opposite lane when the bus, closely following collided.

Both the van and bus driver, who have had their license suspended for 90 days, were questioned under caution by police.

Traffic investigators have to determine if either should face criminal charges, the bus driver for vehicular manslaughter and van driver for indirectly causing the accident.

Route 443 was closed in both directions for five hours before reopening.

After differing eyewitness reports, it appears the rescue vehicle stopped safely, it is unclear why the bus driver lost control

Two helicopters airlifted some of the injured to hospital.

Witnesses said there were chaotic scenes as paramedics and soldiers helped passengers.

Deputy Health Minister Yaakov Litzman arrived at the scene soon after the incident.

Prime Minister Benjamin Netanyahu spoke about the incident at his weekly cabinet meeting.

“I lend my support to the rescue forces who are engaged in rescuing and treating the injured, we are all praying for the victims,” he noted.

The bus company involved in the fatal accident are cooperating with rescue forces, police and MDA.

Findings of a preliminary investigation will be forwarded to authorised bodies.

Since the tragedy, Israeli media have reported that buses more than any other vehicle are involved in road accidents according to new data from the Israel National Road Safety Authority.

Last year there were 33 fatalities in bus accidents, a similar figure to 2017.

Data demonstrated that buses per 10,000 vehicles were involved in the most serious road incidents, ahead of cars, motorcycles and trucks over 34 tons.

The Association of Transportation Drivers in the ‘Power for Workers’ Organisation lamented the fatal Route 443 accident but noted bus drivers were among the most “vilified workers” in the Israeli labour market, there was a shortage of 3,500 drivers in the industry and before circumstances of the accident had been made clear an accusatory finger had been pointed at the bus driver.

“We call on relevant authorities to show responsibility, to investigate the accident and avoid premature and irresponsible charges,” they explained in a statement.

The organisation also called on the Ministry of Transportation and police to promote safety solutions for drivers in addition to bus safety as a national mission.

Yisrael Ganon, chairman of the bus driver’s organisation in Israel, called on Ministry of Transport heads to promote the driver training program initiated by the Bus Drivers Association in Israel to prevent serious accidents in the future.

And Dr. Moshe Becker, a transportation safety expert noted there had been a drop in certified, experienced bus drivers as the transportation industry in Israel had undergone privatisation.