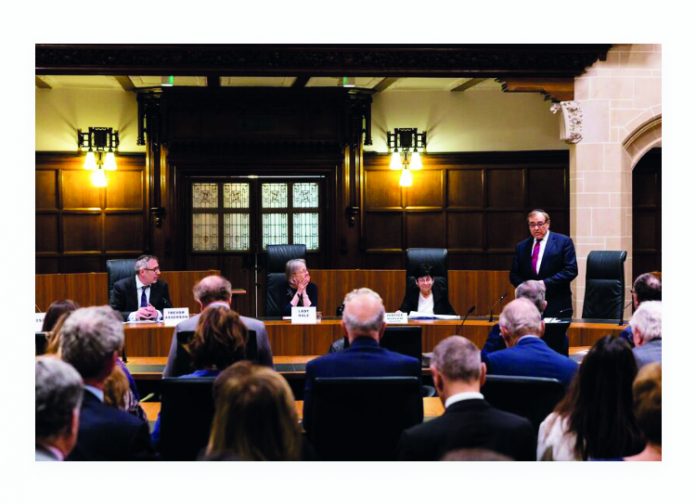 Last Tuesday evening the United Synagogue had the honour of hosting an evening with two judicial heavyweights at the Supreme Court in Westminster. The event was sponsored by Assersons Law Office. Following a wine reception, guests entered the main courtroom to hear from The Right Hon the Baroness Hale of Richmond DBE, President of The Supreme Court, and Miriam Naor, former President of the Israeli Supreme Court.
The evening was chaired by Trevor Asserson who introduced the evening’s topic of the role of the judiciary in protecting democracy and human rights. Lady Hale spoke about the interplay of the relationships between the government, parliament and the people and at what point should the judiciary intervene to say that human rights are being infringed. Justice Naor spoke about this relationship through the prism of the current crisis between the Israeli Government and the Supreme Court on what the process should be with regards to illegal immigrants in Israel.
Following the presentations there was a question and answer session that covered how judges are selected in both countries, whether the changes to the role of the Lord Chancellor in the UK is a step forward and if there is added pressure for Israeli judges from the religious parties. The final question was how does one balance human rights and national security especially with terror threats and conflict, to which the reply was that this was the great challenge facing all democracies. Addressing this point, the closing remark from Trevor Asserson was to quote another former President of the Israeli Supreme Court, Aaron Barak, who said that in the midst of war the law must not be silent