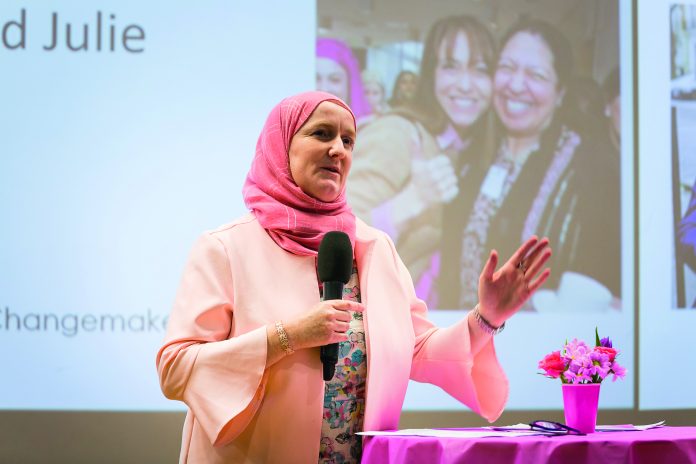 Women from all around the UK vowed to come together to fight hatred in an increasingly ‘difficult and dangerous world’ at Europe’s largest Jewish/Muslim conference.
Hosted by Nisa-Nashim of Britain’s Jewish Muslim Women’s Network – the conference took place at the LSE on Sunday (April 22) with a diverse range of speakers and sessions covering topics from the loss of life in the Israel/Palestine conflict to a practical guide to self defence.
More than 200 Jewish and Muslim women travelled to the conference to represent locations including Manchester, Leeds, Exeter, Peterborough, Surrey, Bournemouth, Luton and Birmingham. There were also delegates from all over London and surrounding areas including Golders Green, Hampstead, Ilford, Wimbledon, Ealing and Harrow.
Many delegates were moved to tears by keynote speaker Robi Damelin, of The Parents Circle – Families Forum, a joint Israeli-Palestinian organisation of more than 600 families, all of whom have lost a relative in the ongoing conflict, that works towards reconciliation between the nations and a sustained peace.
The day also featured many opportunities for creating new friendships between faiths, with delegates bonding over food, poetry and tea. Afternoon prayers were also part of the packed schedule, with Jewish and Muslim services being held side by side.
In her opening remarks, Laura Marks OBE, Jewish Co-Founder of Nisa-Nashim, said: “Over the last year, the world has continued to be a difficult and dangerous place. Seventy one people died in the horrific Grenfell Tower tragedy, 22 young people were murdered at a concert in Manchester, we’ve seen cars driven into innocent people in Stockholm, Barcelona and New York City and Darren Osborne’s murderous attack at Finsbury Park Mosque.
Julie Siddiqi OBE, Muslim Co-Founder of Nisa-Nashim, said: “We must not allow people around us to pitch Jews and Muslims against each other… to fight over who is the most hated!
“The Nisa-Nashim approach is one of collaboration, of meeting and getting to know each other as friends, to understand that in many ways we have a lot in common, in other ways we are different and all of that is fine, to be celebrated and above all, respected.
Nisa-Nashim also this week organised a powerful letter sent by 50 Jewish women – including MPs Luciana Berger and Ruth Smeeth, Facebook Vince President Nicola Mendelsohn CBE and Chief Executive of the Board of Deputies of British Jews Gillian Merron – to local election candidates urging them to protect Muslim women from abuse and attack.
The letter asked candidates for an immediate strategy to make Muslim women safe and then to develop a longer term policy on the issue of gendered Islamophobia.
The Jewish women decided on the unprecedented action after reading a report from Tell MAMA that the greatest impact of anti-Muslim hatred is felt by women who are visibly Muslim – noting that more than half of the victims of incidents were female.