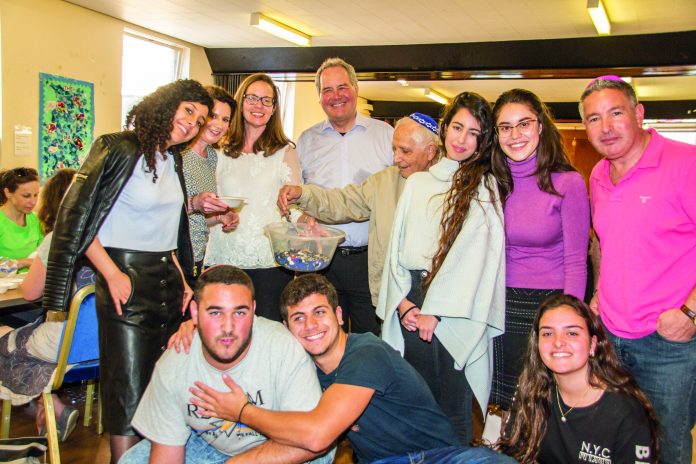 Stanmore and Canons Park Synagogue was silent last Sunday morning as over 100 members of the community came together for the fantastic B Button’s Project. All that could be heard through the class rooms were the handful of buttons as they were taken from large bowls and placed on the tables as fingers and minds got to work counting. As each bag was filled with 1000 buttons, it was called out and held aloft to be collected by the organisers of the event. There was even a score board keeping track as the bags were gathered so we knew how many thousands of buttons had been amassed.
But these weren’t just mere buttons. Each represented a child who perished in the Holocaust, so as we counted the little buttons, the large buttons, the square and the round versions, the long and the short ones, each actually took on a personality, whose life was taken far too early, and therefore made the whole experience far more poignant.
In three short hours, 200,000 buttons had been counted at Stanmore Shul and these were then ready to be stored as part of the wider B Button’s community project. This amazing initiative was the idea of a year 10 Student at the Lakes school in Windermere, which is built on the Calgarth estate and was the original home of the 300 children known as “the boys” who were liberated from the concentration camps at the end of the second world war and brought to the UK in 1945 to restart their lives. This student wanted to create a living and representational monument to the children that perished in the Holocaust and so B’s Button’s project came to life as a way to show and demonstrate what 1.5 million children really represented.
As organisers Melvin Jacobs and Jenny Schwarzmann explain: “Stanmore and Canons Park Synagogue first heard about this project at the Mitzvah Day awards ceremony where Abigail Mann introduced the project and asked for the Jewish Community to help collect more buttons.
We decided to include the button collection as part of Stanmore’s Yad B’Yad programme and we immediately set about asking the community to bring in their buttons – putting up posters around the synagogue, posting on Facebook and using our friends and family to spread the word. Slowly but surely the mound of buttons increased into a small mountain and with it came the stories of where the buttons came from and the memories they evoked.”
To make the countathon even more meaningful, the organising committee invited one of “the boys” to talk to the counters. Harry Olmer shared his experiences of arriving at Lake Windermere and what it felt like adjusting to life in the UK and how he then travelled to Scotland for further rehabilitation. He spoke so movingly and made the count even more emotive to those assembled, which included the Magic Moments delegation from Israel, who came to the count with their host families from the Stanmore community. Local MP, Bob Blackman, was also present for Harry’s account and even counted a few buttons himself before speaking to those involved.