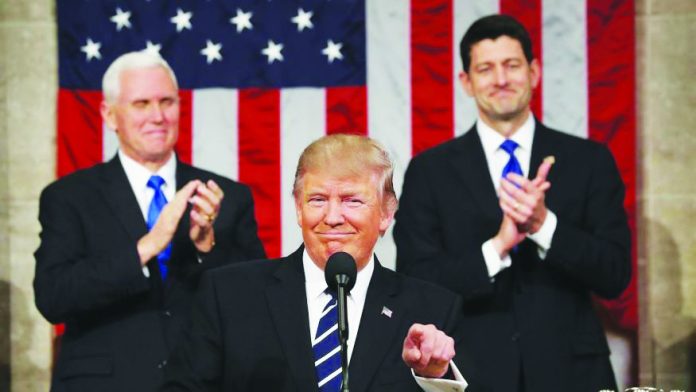 The State Department has apologised for what it says was an “inadvertent mistake” when its embassy in Saudi Arabia edited out part of President Donald Trump’s speech last week mentioning his trip to Israel.

The video, in which Trump gave his itinerary for his first trip abroad as president, was edited to avoid offending the Saudis. But it has now been removed from the embassy’s social media and another video with the complete speech was uploaded to the embassy’s YouTube account on Monday.

A State Department official told JTA in a statement that the embassy had taken the video from the social media account of a private Saudi citizen without realizing that Israel had been edited out.

“Upon learning this, the US Embassy immediately corrected the error, took down the video, and loaded the correct version to its social media accounts,” the official said. “The Embassy expresses its regret for this inadvertent mistake.

Israel and Saudi Arabia do not have formal diplomatic relations but have reportedly developed close security ties behind closed doors in the face of mutual distrust of an ascendant Iran.

Engel is the top democrat on the Foreign Affairs Committee. He says the US has long fought efforts by Middle East nations to “delegitimize” the Jewish state. He says he’s appalled by the embassy’s “incomplete and misleading video.”

Saudi Arabia will be Trump’s initial stop where he will discuss the struggle against Islamic extremism. The President will also seek out fresh new ideas for a Palestinian breakthrough. It’s ironic that his predecessor, Barack Obama, also made Saudi Arabia his first stop as president during the spring of 2009 when he visited Riyadh.

But unlike Trump who will then head straight to Israel, Obama travelled to Cairo to deliver a major address to improve US relations with the Muslim world. The critical difference between that trip and this one is that Trump isn’t skipping Israel.

Trump has been courting the Saudis rigorously since taking office. Many of his top cabinet members, including Secretary of Defence James Mattis, have met with Saudi officials. Trump himself met with Deputy Crown Prince Mohammed bin Salman in March.

But the logic of stopping in Riyadh before Jerusalem is likely to attempt to construct an anti-Iranian coalition and build partnerships in the Muslim world against terrorism.

By making Israel a key part of his initial trip, Trump is showing very clearly that he will be different from Obama, who still remains extremely unpopular with the Saudis and Israelis following his landmark nuclear accord with Iran. Obama’s last few days in office saw him allowing an anti-settlement resolution to pass at the UN Security Council, which is also still a bitter taste in the mouth of Israel.

Donald Trump will arrive in Israel on 22 May, staying one night at the King David Hotel in Jerusalem. Thousands of police will be deployed in and around the capital, making it very difficult indeed for commuters to get around. The resident will be accompanied by First Lady Melania, his daughter Ivanka and her husband Jared Kushner.

The timing of Trump’s visit to Israel one day before Jerusalem Day, when Israel will mark 50 years since the reunification of its capital, elicited speculation that he may use the occasion to announce the embassy’s relocation.

Vice President Mike Pence repeated last week that the idea was still under consideration, but although Trump has probably not made up his mind yet, he is likely to say that this is not the right time to move the US Embassy to Jerusalem.

Deputy Minister for Diplomacy Michael Oren said Trump’s announcement of plans to meet with world Muslim leaders in Saudi Arabia was “excellent” news. Oren told reporters, “It’s in our interest to have an American President who’s respected throughout the Arab world and is committed to harnessing the Arab world to make peace between us and the Palestinians.”

Trump’s trip to Saudi Arabia together with leaders from across the Muslim world will begin to construct a brand new foundation of cooperation and support with Arab and Muslim allies to combat extremism, terrorism and violence.

The President’s trip will then take him to the Vatican to meet Pope Francis, and by the time Donald Trump returns home, he would have visited the spiritual centres of Islam, Judaism and Catholicism.