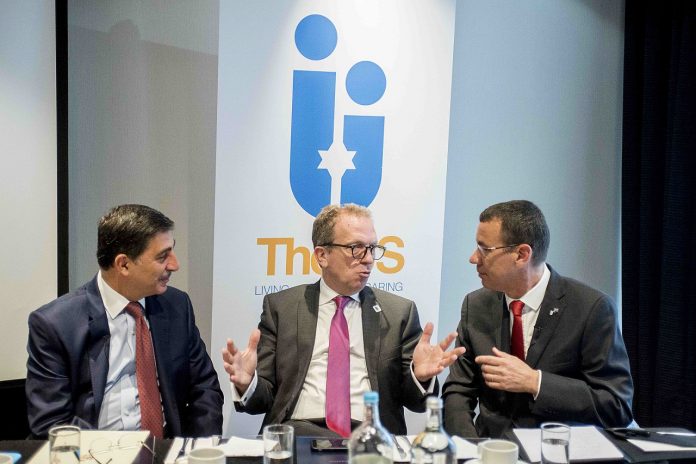 Last Wednesday, at the Hilton London Metropole Hotel, the United Synagogue held a landmark business breakfast as it hosted both the Israeli and Jordanian Ambassadors. This was the first time they had shared a platform at an official event, which was chaired by Michael Goldstein, the newly elected President of the United Synagogue.
Attendees heard from both Mark Regev, the Israeli Ambassador, and Mazen Homoud, the Jordanian Ambassador. They each reflected on the 23 years of peace between their two countries and their professional and personal involvement in the relationship since the historic treaty. They also stated how the treaty between the two countries shows that peace and prosperity is possible in the region when both sides are willing partners. With such uncertainty in the region, relations between Israel and its Arab neighbours are evolving with the common threat of extremism.
Mr Regev said: “Israel is currently speaking to more Arab countries than in the history of the Jewish State. There is a convergence of national security concerns and a recognition that Israel is a friend and ally against extremism.”
Mr Homoud concurred with this by stating: “At the recent Arab League conference it stated that all 23 nations want peace with Israel. The Jordan-Israel peace treaty is a model for this with joint initiatives leading to greater prosperity for all.”