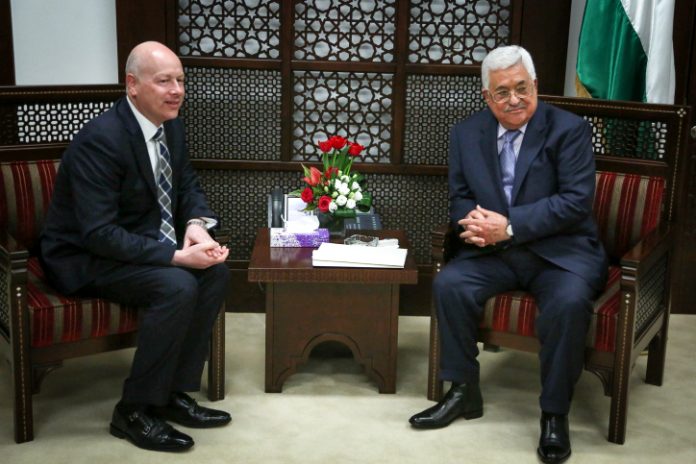 The highly anticipated US peace plan for Israel and the Palestinians has been delayed until next March, according to Israeli media reports.
Writing in al-Monitor, Israeli journalist Ben Caspit said that US President Donald Trump and his staff’s original plan was to launch the peace initiative in January 2018 during a ceremony in Washington with the participation of Israel and the Palestinians as well as high-level representatives from Saudi Arabia, the United Arab Emirates, Egypt and Jordan. Caspit said the intention now is to delay this launch until March 2018.
The New York Times reported last Saturday that President Trump and his advisers have begun the process for drafting an Israeli-Palestinian peace plan. The plan will reportedly consist of regional negotiations along three channels: Israeli-Palestinian with US mediation; a regional track which will include rehabilitation of the refugee camps; and an international track. It is also reported that the initiative will redefine the concept of “sovereignty” in a way that allows the Israelis and Palestinians to share territory creatively.
Speaking about the US plan, US Special Representative for International Negotiations Jason Greenblatt said: “We are not going to put an artificial timeline on the development or presentation of any specific ideas and will also never impose a deal. Our goal is to facilitate, not dictate, a lasting peace agreement to improve the lives of Israelis and Palestinians and security across the region.”
Israel’s Channel 10 reported that Palestinian Authority Chairman Mahmoud Abbas was told about the peace plan during his trip to Saudi Arabia, and that he should respond positively to it. Ahmad Majdalani, a close associate of Abbas, rejected these reports.
On Tuesday, the Hezbollah-affiliated newspaper Al-Akhbar published what it called a “secret document of the Saudi Foreign Ministry” about a peace deal between Israel and the Palestinians. The Saudi document calls for the permanent settlement of Palestinian refugees in the West Bank or their naturalisation by other Muslim states, Jerusalem to be recognised as an international zone and a major summit to launch a final peace agreement.
In exchange, the report says, the US is expected to increase international sanctions against Iran for its ballistic missile programme and its sponsorship of terrorism around the world, as well as revisit the Joint Comprehensive Plan of Action (JCPoA) nuclear deal with Iran to ensure it is strictly enforced. The document also demands “intensive intelligence cooperation in the fight against organised crime and drug trafficking supported by Iran and Hezbollah”.