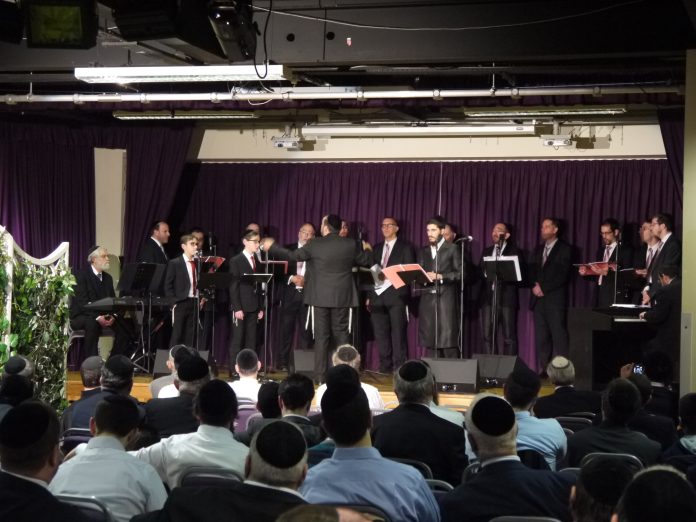 Last weekend, London’s community was privileged to host the Halelu Cantorial Choir from Ramat Bet Shemesh, Israel, accompanied by Chazzan Avraham Kirschenbaum. The group, comprised of 13 men, two boys and a choir master, proved to be a massive hit in all the three locations in which they sang. On Friday night, Hendon Adath Yisroel shul saw
possibly their biggest turnout ever, which reportedly overflowed into the hallway. One congregant said that he had davened at the Adath for 40 years and heard countless choirs in his time but “never anything as incredible as this.” Amongst the distinguished present was maestro Alan Friedman, previously choir master of Raleigh Close shul, who said Lechah Dodi was “absolutely stunning.” On Shabbat day, Shacharis in Ner Yisrael was sung by Chazzan Shmuel Neuman, who made a special appearance. Kel Adon made a particular impact on the crowd, and there was spontaneous accompaniment to Anim Zmirot,
which was sung by a young member of the shul. The Motzei Shabbat concert at Hasmonean girls school was attended by many of the people present at Adath and Ner, who had come back for more! A massive selection was performed, including solos from the various chazannim, as well as choir pieces and instrumental accompaniment. The mixture of classics, such as Ana Avda by Yossele Rosenblatt, and modern hits, was very well received. Although the performance went 15 minutes overtime, those present unanimously agreed that it finished too soon.