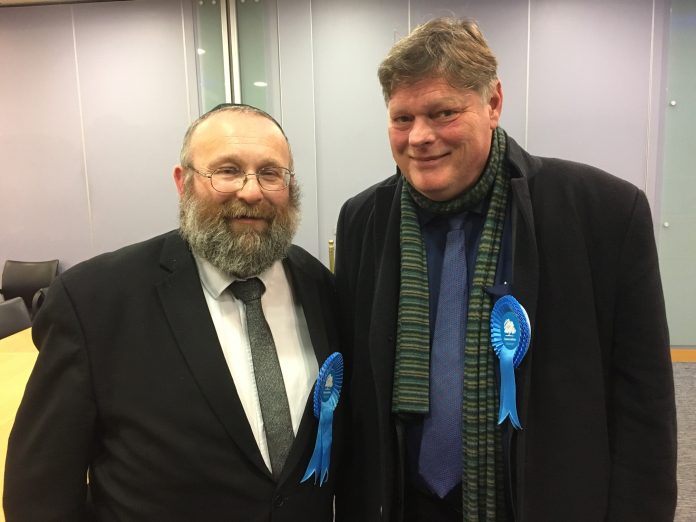 As you get off the 135 bus from Manchester city centre, you are faced with quite the most magnificent building near the very top of Cheetham Hill, a neighbourhood that before the Second World War was the home to Manchester’s thriving Jewish community. The building is Higher Crumpsall Synagogue towering above the landscape. Rabbi Arnold Saunders’ synagogue, the largest in Greater Manchester, is a 1920s art deco masterpiece, holding over 1200 seats.

I arrived at the synagogue, as his Election Agent to start our campaign for the Kersal by-election over six weeks ago. The synagogue was always for me the visual inspiration for what became Arnold’s third and this time victorious attempt to win the seat of Kersal for the Conservatives. We are dealing with the northern Labour inner city heartlands of Manchester and Salford, which meet each other on the border of Cheetham Hill. In Manchester and in eastern Salford, the Conservatives have not elected a councillor in 25 years. This all changed last Thursday, when Rabbi Saunders took Kersal with a 21% swing of the vote against a confident Labour Party.

So why did we win? I think it was because we picked the perfect candidate. From the moment Arnold and myself launched our bid for Kersal in April 2015, during the General Election campaign, which gave David Cameron his majority in Parliament, I knew that I was going to take the Conservatives into a position they had not reached in the ward for decades. We lost that year but came so close. I knew then that Arnold was well known and well respected throughout north Manchester, in Jewish circles and with everyone else. He is, after all, the TV Rabbi, always on the BBC or Sky News to talk about the Holocaust or antisemitism. He is a master of interfaith relations with Muslims, Christians and Hindus. And, most important of all, Arnold lives at the very heart of the Manchester/Salford kehilla, in the fastest growing Jewish community in Europe.

The Manchester Conservatives collaborated closely with Salford Conservatives, with Manchester investing a significant minority of the cash budget. We distributed six different leaflets in addition to a letter to all postal voters. We had more people out on the streets of Kersal than we had ever had before. Still, Labour had even greater numbers. They had Andy Burnham, the Labour Mayoral candidate, in addition to local MPs Iven Lewis and Graham Stringer. Everything but the kitchen sink.

We realised that failure to canvass in the ward between elections, could be catastrophic, so early in the campaign, together with the most resourceful member of our team, Ari Leitner, we started to canvass the Jewish voters, knowing full well that the older Jewish voters would not switch from Labour. Ari felt that canvassing the younger Orthodox families would be more productive. They would by instinct be Conserva
tive and owe no loyalty to the Labour Establishment. Several days each week we canvassed the kehilla. It would take us several hours just to do half of each street. The message we wanted to get across was to vote for Arnold because he is heimish, part of the home community. People began to understand that Arnold, understood better the needs of the kehilla than anyone else. Arnold was local. He was around the corner, unlike the Labour councillors. We kept canvassing until one hour before the polls closed on election night. We got out first time voters, more than any other party.

One man came out of his house and yelled at Ari, “Stop doing that. If Arnold wins Labour will take away all our funding.” After Arnold’s victory, the same man bought Arnold a box of chocolates.

Arnold’s wife Myrella, was overjoyed at her husband’s success, whilst Rabbi Saunders couldn’t quite believe what he had actually achieved. He was given a full vote of confidence by the community. What more could you ask for?