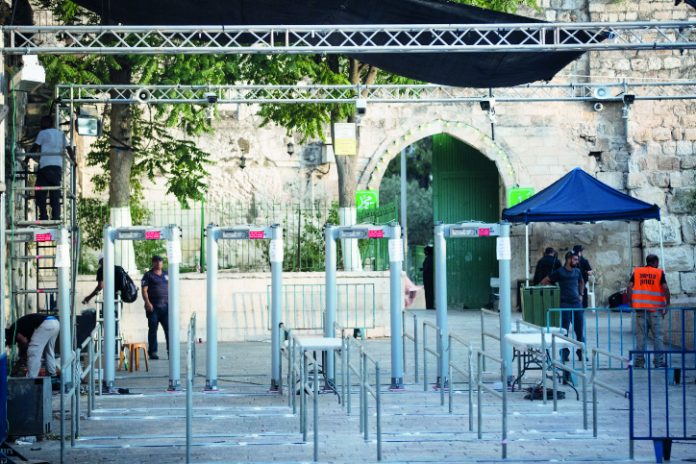 Despite Israeli authorities dismantling the metal detectors at the entrance to Temple Mount, the wave of anger from the Arab world has continued, with Terror groups Hamas and Fatah both calling for this Friday to be another ‘day of rage.’
Fatah youth group Shabiba called on Palestinians to remain “steadfast” in the defence of Jerusalem, and The Tanzim, an armed militia affiliated with Fatah, have been organising mass demonstrations throughout Jerusalem and the West Bank.
This is in addition to widespread riots amongst many radical Palestinians, who claim Israel have violated the status quo in the holy site. However some Palestinians were not bothered by the new security procedures until they were threatened by the Muslim Waqf and told not to enter the holy site.
The security cabinet says the detectors and cameras will be replaced with smart, less obtrusive, surveillance methods which could mean they will simply be removed to just outside the Lions’ Gate rather than around the Temple Mount area. Israel installed metal detectors at entry points to the Al-Aksa Mosque compound after two police officers were fatally shot on 14 July.
Journalists from the Reuters news agency said they saw municipal workers installing metal beams above some of the narrow stone paved streets in the old city for closed circuit TV cameras. Israeli media said there were plans to invest in advanced camera systems whilst the cabinet statement said it had allocated 100 million shekels (about £20 million) for the equipment and for additional police officers.
Until the new measures are put in place, the police presence at the site will be enhanced in order to ensure security for the worshipers and visitors to the site.
Despite the about turn by the Netanyahu government, the Muslim Waqf on Tuesday was still refusing to allow Muslims to return to the Al Aqsa mosque and Palestinian Authority President Mahmoud Abbas suspended official contacts with Israel in a bid to place further international pressure on the Jewish state.