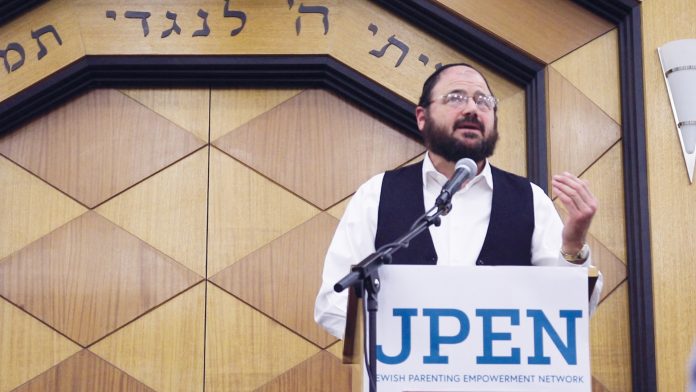 Over 400 people attended Ner Yisrael Synagogue on Tuesday to hear a fantastic set of speakers on the subject of technology and teens organised by JPEN. The meeting was honoured with the presence of Dayan Chanoch Ehrentreu who came to show his support.
Dr Andrea Whyte, presenting the speakers on behalf of JPEN, opened proceedings by speaking to parents and educators. She remarked that we have to “understand the technology that children have in their pocket” and that we are collectively “taking responsibility to move forward.”

Following this, Rabbi Kimche, Shul Rabbi and a well-respected authority in the NW London community, gave a note of welcome and introduced the evening by talking about the challenges which we face and the influence that phones are having on us and our children. He stated that technology is “equally a problem for adults,” however it is much more acute for youngsters and “the dangers are massive.”

Following on from his words of wisdom, Rabbi Howard Cohen, Assistant Headteacher at Hasmonean, gave an impassioned talk about the impact that smartphones can have on students and their peers. He noted how over the years things have really developed and that children “don’t hold conversations anymore” and that “mobile phones is one of the biggest things of social exclusion.” He spoke about the facelessness of sending harsh messages via social media, which have an enormous negative impact on others. The perpetrator may not even realise the harm being done, but that is the reality he faces each day in school. He said “I am not convinced that having a phone makes people safer, but makes them more of a target.” He encouraged parents not to buy a smartphone for their child, nevertheless he understands their predicament.

Child and adolescent psychiatrist Dr Olivia Fiertag was the next orator, telling the audience of the effect that technology can have on the minds and well-being of teenagers and the things to look out for if you think that your child is in danger.

Mr Zalman Roth of TAG gave a superb synopsis of safety, filtering, monitoring and available resources, giving a very humorous, yet powerful message on how to combat or work with the combined talents of NW London’s finest teenage whizz-kids. He stated: “We must keep in mind that filters are very much necessary but not enough of a protection,” and that parents must do all they can to guide and protect their children.

Enter the keynote speaker, Rabbi Yakov Horowitz, a world-renowned educator and author from the USA. As founder of the CJFL and Project Yes, he spoke on the subject of ‘Postpone, Prepare and Protect’. He expressed it with wit, understanding, passion and, above all, empathy for the parents and empathy for the children. He said that parents “should encourage children to turn their phones off at dinner time” and he insisted that parents should know how to interact with their child and create a relationship based on love and trust and not just on fear. He gave the theory, the practical advice and the anecdotes to back up all that he told the enthralled audience.

The evening ended with a Q & A session which would have threatened to go on all through the night, if not for the time constraints upon the assembly.

Look out for more ideas, events and information from JPEN in the very near future.