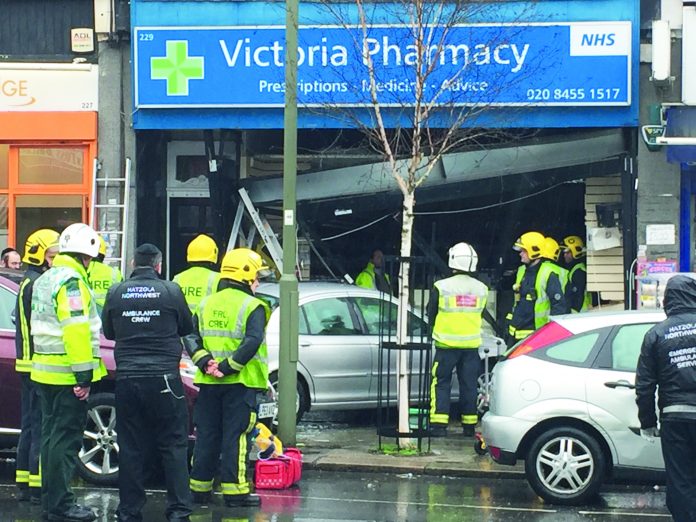 The community are asked to continue to pray for Shimon Elkouby and David Richards after a heartbreaking crash on Golders Green Road on Wednesday. The two men were initially treated for life threatening injuries, but as The Jewish Weekly went to press, they were reportedly both out of immediate danger, but had suffered severely broken bones amongst other injuries.

The crash occurred after a silver Jaguar mounted the pavement outside Grodzinsky’s Bakery on the corner of Beverly Gardens, ploughing into David, who was on his way to work at Menachem’s Butcher shop across the road.

As 46 year old David was carried along on the bonnet, Shimon who is in his 80’s and had been walking along the road with his walking stick, tried to get out of the way, but was swept along under the car, as it smashed into Victoria Pharmacy on Golders Green Road.
David was thrown with tremendous force into the window, whilst Shimon ended up being trapped under the car. Both were conscious at the time.

The pharmacy is situated a few shops either side of Shefa Mehadrin and La Fiesta, and is opposite Kosher Kingdom. Luckily, due to the time of year and the location, there were many Pesach shoppers and nearby workers around, who rushed to the incident to help lift the shop’s front clear from the vehicle.

Emergency services including police, paramedics and London Fire Brigade were quickly at the scene. Road blocks were quickly set up before both seriously injured men were transported to hospital, with David being airlifted to St Mary’s after the air ambulance had managed to land at the nearby Princess Park.

One of the people who helped lift the car off told The Jewish Weekly,” I was working across the road, when I suddenly heard a loud bang; the loudest noise I have ever heard in my entire life. We all rushed across the road to the terrible scene and remarkably we managed to lift the car off together. After what I saw, it is truly miraculous that they are both still alive.”

David’s mother Rachel had gone to Israel for Pesach but has now returned to London after learning of the news.

The distraught driver, whose identity is known to The Jewish Weekly, was reportedly lent the car by a friend. He was questioned by police in Fame recruitment across the road from the incident, but was not arrested.

A police spokesman said: “Police were called at 11.46am on Wednesday, 28 March to reports of a road traffic collision in Golders Green Road, NW11.

“Officers, the London Ambulance Service and London Fire Brigade attended and found a car in collision with a pedestrian and a shop. A man has been taken to a central London hospital with possible life-threatening injuries. No arrests have been made and enquiries continue.”

The community are asked to keep praying for the speedy recovery of Shimon ben Zohora and Dovid Moshe ben Rochel.