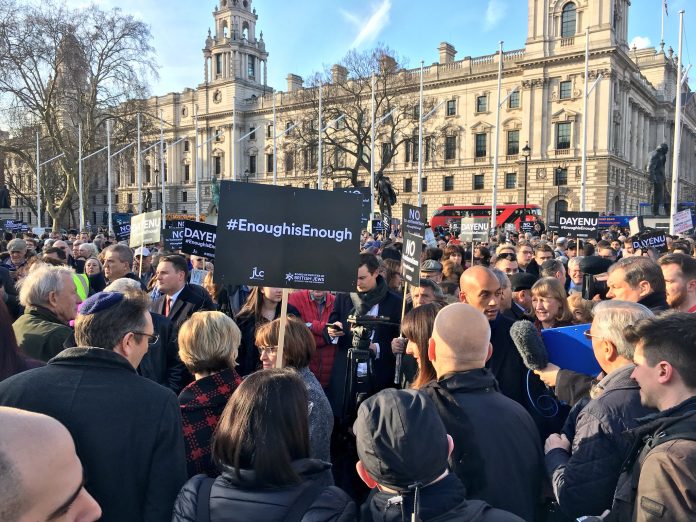 Today, leaders of British Jewry tell Jeremy Corbyn that enough is enough. We have had enough of hearing that Jeremy Corbyn “opposes antisemitism”, whilst the mainstream majority of British Jews, and their concerns, are ignored by him and those he leads. There is a repeated institutional failure to properly address Jewish concerns and to tackle antisemitism, with the Chakrabarti Report being the most glaring example of this.

Jeremy Corbyn did not invent this form of politics, but he has had a lifetime within it, and now personifies its problems and dangers. He issues empty statements about opposing antisemitism, but does nothing to understand or address it. We conclude that he cannot seriously contemplate antisemitism, because he is so ideologically fixed within a far left worldview that is instinctively hostile to mainstream Jewish communities.

When Jews complain about an obviously antisemitic mural in Tower Hamlets, Corbyn of course supports the artist. Hizbollah commits terrorist atrocities against Jews, but Corbyn calls them his friends and attends pro-Hizbollah rallies in London. Exactly the same goes for Hamas. Raed Salah says Jews kill Christian children to drink their blood. Corbyn opposes his extradition and invites him for tea at the House of Commons. These are not the only cases. He is repeatedly found alongside people with blatantly antisemitic views, but claims never to hear or read them.

Again and again, Jeremy Corbyn has sided with antisemites rather than Jews. At best, this derives from the far left’s obsessive hatred of Zionism, Zionists and Israel. At worst, it suggests a conspiratorial worldview in which mainstream Jewish communities are believed to be a hostile entity, a class enemy. When Jeremy Corbyn was elected leader of the Labour Party, Jews expressed sincere and profound fears as to how such politics would impact upon their wellbeing. Our concerns were never taken seriously. Three years on, the Party and British Jews are reaping the consequences.

Routine statements against antisemitism “and all forms of racism” get nowhere near dealing with the problem, because what distinguishes antisemitism from other forms of racism is the power that Jews are alleged to hold, and how they are charged with conspiring together against what is good. This is not only historic, or about what Jeremy Corbyn did before being Party leader. It is also utterly contemporary. There is literally not a single day in which Labour Party spaces, either online or in meetings, do not repeat the same fundamental antisemitic slanders against Jews. We are told that our concerns are faked, and done at the command of Israel and/or Zionism (whatever that means); that antisemitism is merely “criticism of Israel”; that we call any and all criticism of Israel “antisemitic”; that the Rothschilds run the world; that ISIS terrorism is a fake front for Israel; that Zionists are the new Nazis; and that Zionists collaborate with Nazis.

Rightly or wrongly, those who push this offensive material regard Jeremy Corbyn as their figurehead. They display an obsessive hatred of Israel alongside conspiracy theories and fake news. These repeated actions do serous harm to British Jews and to the British Labour Party.

Jeremy Corbyn is the only person with the standing to demand that all of this stops. Enough is enough.

Board of Deputies of British Jews, Jewish Leadership Council

A call to action by Jonathan Arkush before the protest

For more than the last two years, the Jewish community has been exposed to a constant drip-feed of anti-Semitism coming from Labour members.

The Board of Deputies has continually condemned individual incidents and the weak, pathetic and slow response from the Labour Party, which has failed victims and emboldened perpetrators.
After a week of near-daily antisemitic incidents, the revelation that Labour Leader Jeremy Corbyn personally defended an antisemitic mural has compounded matters. It’s time we say, ‘Enough is enough!’

Tomorrow, the Board of Deputies and the Jewish Leadership Council will be presenting an open letter with our concerns to the Parliamentary Labour Party (PLP) Chair John Cryer, in advance of the PLP meeting at 6pm. We know we have many friends in the Labour Party and we want to support them in speaking out as well.

Please join us on Parliament Green by 5:30pm, on Monday 26 March, to make our collective voice heard.

Please share this message as widely as you can. Help us to get a strong showing from the Jewish community and all those who oppose antisemitism.

I hope to see as many of you as possible tomorrow.

Thank you for your letter to the Labour Party concerning anti-Semitism issued as a press statement last night.

First of all, let me acknowledge the anger and upset that provoked it, and repeat my offer of an urgent meeting to discuss the issues you have raised as soon as possible.

I stated yesterday, and repeat today, that I will not tolerate any form of anti-Semitism that exists in or around our party and movement. I am committed to eliminating anti-Semitism wherever it exists.

As I told the Labour Party conference in 2016, anti-Semitism is an evil that led to the worst crimes of the 20th century. Prejudice and hatred of Jewish people has no place whatsoever in the Labour Party, and every one of us has a responsibility to ensure it is never allowed to fester in our society again.

I recognise that anti-Semitism has surfaced within the Labour Party, and has too often been dismissed as simply a matter of a few bad apples. This has caused pain and hurt to Jewish members of our Party and to the wider Jewish community in Britain. I am sincerely sorry for the pain which has been caused, and pledge to redouble my efforts to bring this anxiety to an end.

While the forms of anti-Semitism expressed on the far Right of politics are easily detectable, such as Holocaust denial, there needs to be a deeper understanding of what constitutes anti-Semitism in the labour movement. Sometimes this evil takes familiar forms – the east London mural which has caused such understandable controversy is an example. The idea of Jewish bankers and capitalists exploiting the workers of the world is an old anti-Semitic conspiracy theory. This was long ago, and rightly, described as “the socialism of fools”.

I am sorry for not having studied the content of the mural more closely before wrongly questioning its removal in 2012.
Newer forms of anti-Semitism have been woven into criticism of Israeli governments. Criticism of Israel, particularly in relation to the continuing dispossession of the Palestinian people, cannot be avoided. Nevertheless, comparing Israel or the actions of Israeli governments to the Nazis, attributing criticisms of Israel to Jewish characteristics or to Jewish people in general and using abusive phraseology about supporters of Israel such as “Zio” all constitute aspects of contemporary anti-Semitism. And Jewish people must not be held responsible or accountable for the actions of the Israeli government.

The Labour Party has always opposed anti-Semitism, old and new, and always will. We are proud of our deep historical links with Jewish communities, and to have fought alongside generations of Jewish men and women against fascism, prejudice and discrimination. This is a part of our common heritage from which we will never be separated. But I acknowledge that anti-Semitic attitudes have surfaced more often in our ranks in recent years, and that the Party has been too slow in processing some of the cases that have emerged. Early action has nevertheless been taken, and we will work to speed up procedures, to deal with cases of anti-Semitic abuse or attitudes.

I am committed to making our Party a welcoming and secure place for Jewish people. Zero tolerance for anti-Semites means what it says, and the Party will proceed in that spirit. That demands among other things the overdue full implementation of the recommendations of the Chakrabarti report, including a programme of political education to increase awareness and understanding of all forms of anti-Semitism.

The battle against anti-Semitism should never become a party political issue. It must unite all of us if we are both to honour the memory of the victims of the bestial crimes of the 20th century and build a future of equality and justice for all.

In that spirit, I must make it clear that I will never be anything other than a militant opponent of anti-Semitism. In this fight, I am your ally and always will be.