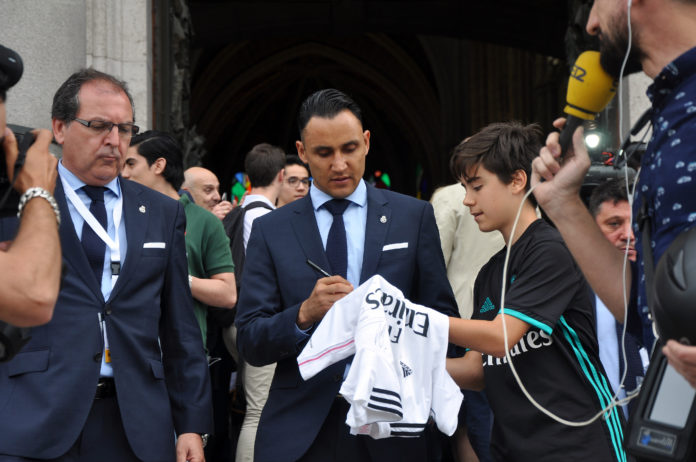 World Jewish Congress has written to Real Madrid president Florentino Pérez and chief executive José Ángel Sánchez expressing disappointment at the club’s presentation of a shirt to Palestinian protester Ahed Tamimi before a game against Atletico Madrid at the Santiago Bernabéu Stadium earlier this month.
Tamimi backs violence against Israel.
Singer noted WJC’s commitment to the spirit of sport advocating tolerance and respect and building bridges which are all values that are evident in Madrid’s Foundation’s social welfare activities.
In light of this philosophy, WJC made clear their abhorrence to Tamimi who has been sentenced to an eight-month prison term for assaulting an Israeli officer after pleading guilty thereof.
Tamimi openly calls for the destruction of Israel.
On a visit in France, Tamimi said, “The goal (of the Palestinian cause) is not only to remove the Israeli community near Nabi Saleh. Our goal is the large-scale settlement, which is Israel.”
Singer wrote, “Honouring an individual with such an extreme outlook and track record sends a distinct and disconcerting message that Real Madrid has chosen to take sides in the Israeli-Palestinian conflict.
“There is no place for xenophobia and the promotion of violence in sports, nor is there room for political extremism.
“Jewish and Israeli supporters of Real Madrid should not have to feel alienated, simply by virtue of the fact that the club that they love has chosen to identify with an individual who espouses an ideology of hatred.
“Anti-Israeli sentiments have become synonymous with antisemitism. Any move to propel these sentiments runs an incredibly dangerous risk of encouraging antisemitism, and this cannot be accepted.”
Singer concluded with a hope that Real Madrid would promote tolerance on and off the field but that it would leave politics out of any conversation.
Israel’s Foreign Ministry spokesman, Emanuel Nachshon, lambasted the 2018 Champions League winners for the presentation of its famous shirt to Tamimi as “shameful”, a decision supported by Spanish Ambassador to Israel, Daniel Kutner, who described Tamimi as a “defender of violence and terror”.
Israel Security Agency banned the Tamimi family from travelling through Israeli territory for the 20-day European trip.
It is unclear how they made the trip.