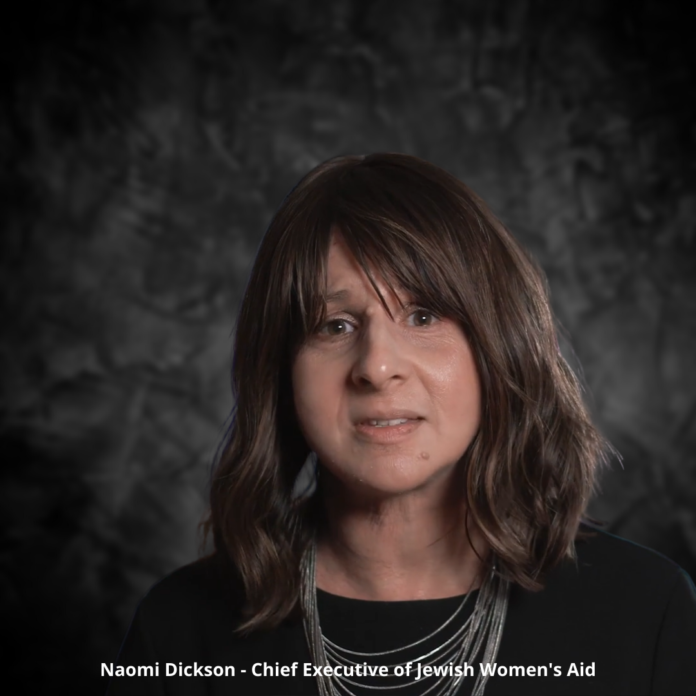 Four Jewish women who experienced domestic abuse and sexual violence have told their harrowing stories on camera as part of the forthcoming ‘We must act now before her time runs out’ matched funding campaign on Sunday 13 to Monday 14 March.

Extracts released this week reveal shocking examples of physical, sexual and psychological abuse which took place in the Jewish community in London and Manchester.

Whilst all their stories are unique, they help to highlight the common ways that Jewish women are harmed and the stigma that still exists around reaching out for support. Funds raised in the campaign will help secure the future of Jewish Women’s Aid, which supported 546 women and over 300 children in 2021.

Client A – ‘Sara’
‘Sara’ is an orthodox observant woman whose husband sexually, physically and emotionally abused her. In the films her face is obscured and a voice actor speaks her words.

“My husband expected and demanded sex every single night, getting a pillow and putting it over my face, screaming and shouting at me, grabbing me. I can remember once, we went into the bathroom and there was the tall towel radiator and he smashed me against it, and he said ‘I’m going to kill you and then I’m going to kill her’, about our daughter.”

“My counsellor at Jewish Women’s Aid was tremendous, she never judged me. I found myself saying things that were so deeply, deeply shameful and so painful and I could cry in front of her, I could be angry… it was in this setting that I understood that actually what I’d experienced was not marital sex but actually rape.”

Lia’s husband physically and emotionally abused her, as well as their son. Eventually she had to call the police due to his escalating violence.

“Nobody really wants to admit that they’re in an abusive relationship and that things were happening to their children but I realised that there was not going to be any way out of this.

“He was stopping me from doing a lot of things, I didn’t have access to our joint bank account and he was literally just trying to shut me off from the world.”

“Over time Jewish Women’s Aid gave me practical support, my children were offered play therapy because for a long time, my son didn’t really want to speak and he didn’t have the confidence to say anything but over time he found his voice.”

If it wasn’t for Jewish Women’s Aid, Lia said, “I don’t think I’d be here today.”

Client C suffered physical abuse including during pregnancy, as well as emotional abuse.

“He put his hands around my neck and tried to strangle me. All he was saying was ‘sorry, sorry, sorry’, he doesn’t know what came over him. A few months later it happened again.

“I became pregnant again and I knew that if I wanted this baby, I could not stay in this life.”

If it wasn’t for Jewish Women’s Aid, Client C said, “I don’t know where I’d be today, it was like a lifeline for me.”

Client D was 23 when she contacted Jewish Women’s Aid after suffering coercive control at the hands of her boyfriend. In the film her face is obscured and a voice actor speaks hear words because she is still fearful of her ex.

“I was only 19 when I started this relationship. I was at university and I thought I was the luckiest girl in the world having someone who was that interested in me.

“I initially approached Jewish Women’s Aid after I had left the relationship and I went to see a caseworker who really helped me to understand my situation but also what a healthy relationship should look like.

“If it wasn’t for Jewish Women’s Aid I wouldn’t be where I am today.”

Naomi Dickson said, “We are in awe of the women who offered to tell their story as part of our campaign. They are making a huge contribution to opening up the conversation about domestic abuse and sexual violence in our community and we are all hugely grateful. What their stories show is how abuse affects all parts of our community, how varied it is and of course, how hidden.

“We need to make sure that we are challenging abusive behaviour and also that we have the professional services in place to support affected women. But we have never faced a less stable fundraising climate. With Covid still affecting dinners and events, and a number of grants coming to an end, this campaign aims to raise enough for us to continue to offer our free services for at least an additional year. We call on the community to support Jewish Women’s Aid to make sure we can continue to be here to support the women who need us.”

Donations can be made at www.charityextra.com/jwa