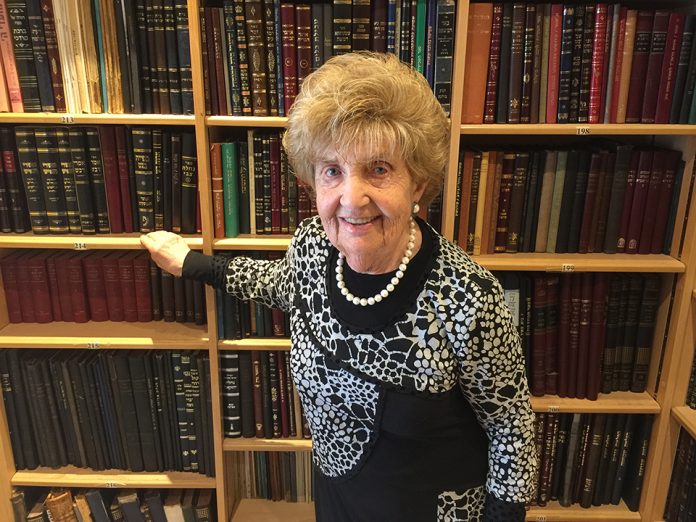 The former head of the London Beth Din, Dayan Chanoch Ehrentreu joined hundreds in congratulating his wife, Rebbetzen Ruchie (Rachel) for being named by her Majesty Queen Elizabeth II on this year’s birthday honours list.

The Rebbetzen as she is known to thousands will receive the medal of the “Order of the British Empire” for services to the “vulnerable and elderly members of the Jewish community of North West London.”

For the last 32 years of her life, Ruchie Ehrentreu, 84, has devoted every Sunday of her time visiting Jewish and non-Jewish patients and taking care of their requirements at the Royal Free hospital in Hampstead as the chaplain. If for any reason she was unable to be there on the Sunday, you would see her at the hospital on the Monday.

In addition the Rebbetzen is behind the monthly “Neshea” group where more than hundred elderly, disabled and holocaust survivors meet in Golders Green, London to socialise and hear a variety of exciting and motivational speakers once a month.

Ruchie said she was unaware she was being considered for the honour and when asked about it, simply shrugged her shoulders and said “I just love what I do.”

Her husband Dayan Ehrentreu on the other hand said “In my opinion, she should have been made a Baroness or a Lady,” referring to all the voluntary work his wife does.

Their daughter Ricki Dunner who lives in Golders Green was extremely proud of her mother saying “She feels that she gains from it so much more than they do” an added “She really loves to give and do this wonderful Mitzvah.”

The Ehrentreu’s have been Rabbi and Rebbetzen at the Beit Hamedrash Beit Yisrael in Shirehall Park, Hendon since 1985. The management and kehillah, (congregation) wished the Rebbetzen, “Many more years of good health to carry on her wonderful work and expressed the need that she should continue to inspire the community through her exemplary acts of Chessed and Kiddush Hashem which are always carried out with her unique charm and genuine warmth.” Mazel Tov.