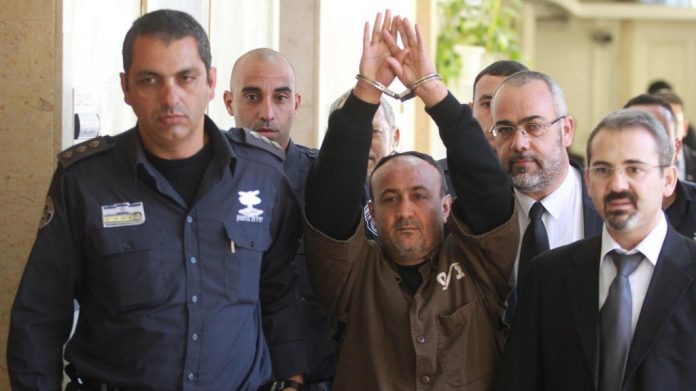 The restaurant chain apologised to Palestinian activists for any offence it may have caused when it mocked high-profile Israeli prisoner Marwan Barghouti for secretly breaking his fast.

Barghouti, who is serving five life sentences for masterminding a series of deadly attacks against Israelis at the start of the Second Intifada, called for a Palestinian hunger strike in Israeli jails beginning 17 April. At the time the Palestinian leadership in Ramallah were concerned Barghouti was attempting to once again flex his political muscles after Palestinian Authority President Mahmoud Abbas, who is also head of Fatah, carried out a number of steps to isolate and weaken the president’s political rival in prison.

But the former Tanzim leader managed to convince a few hundred Palestinian Fatah members in jail to begin a fast. However Barghouti was caught on camera unwrapping a chocolate-covered, almond-flavoured wafer in his prison cell and eating it in his toilet stall along with some cookies.

A prison official told Channel 2 News that the video clip of Barghouti eating was released to convince the hunger strikers to also eat by hiding food in their cells. However most of them resisted the temptation, the official said.

Now that the video was made public, Pizza Hut’s franchise in Israel produced an advert poking fun at the Palestinian hunger and placed it on their Facebook page. The pizza chain placed a banner in Hebrew over a screenshot from the clip released by the Israel Prisons Service of Barghouti eating. It read, “Barghouti, if you are already going to break the hunger strike, isn’t pizza better?”

The advert also included a Photoshopped Pizza Hut box on the floor of the prison cell, as well as a piece of pizza in the sink.

In response, a large number of Palestinians called for a boycott of the pizza chain on social media unless an apology was forthcoming.

Pizza Hut quickly issued the apology on their Facebook account and the video was deleted.
The statement read “Pizza Hut International apologises for any offence caused by a recent post on Pizza Hut Israel’s Facebook page. It was completely inappropriate and does not reflect the values of our brand. The local franchise in the country removed it immediately and the relationship with the agency that posted it was terminated, and we truly regret any hurt this may have caused.”

Barghouti was also photographed eating food in his cell during a previous prisoner hunger strike in 2004. Those still shots were taken with a hidden camera through a hole in the wall of his cell.

Marwan Barghouti is the former Tanzim leader whose objective was to open fire on passing Israeli vehicles and kill as many Israelis as possible starting in 2000. He surrendered to Israeli security forces in 2002. He was put on trial and eventually found guilty of five murders, serving five life time sentences. Next year he will celebrate his 60th birthday.
In the Fatah Central Committee’s leadership elections last December (the party’s most senior institution), Barghouti won first place. With Abbas’s steady decline in popularity amongst Palestinians, plus the fact the president is well into his twelfth year of a four-year term as president, Palestinians in the West Bank are looking for alternative leadership.
They say that Marwan Barghouti is the movement’s undisputed leader, despite being behind bars. His wife Fadwa also took first place in the movement’s Revolutionary Council elections (the party’s second most senior institution).

But Abbas still refused to appoint him as deputy chairman of Fatah, as Barghouti had expected, and other senior positions were divided between rivals Jibril Rajoub and Mahmoud al-Mottak.

Barghouti’s backers also failed to be elected to other spots in the Central Committee, and he knows that he is being slowly pushed out of the picture.

Forced from the halls of power, Barghouti is using the strike to signal to the PA that he still wields considerable power in Israeli jails and on the Palestinian streets. He asked 2,890 Fatah party security prisoners, as well as those from other movements, to participate in the hunger strike to show a united Palestinian protest against Israel.

According to Palestinian officials, 1,500 inmates have been refusing food since the strike began last month to “protest prison conditions.” However, Israeli officials say only some 800 continue to refuse food. Israel has threatened to bring in foreign doctors to force-feed the prisoners.

The Palestinians insist that their demands are about the improvement of conditions in Israeli jails including being allowed more visits and private telephones in cells.