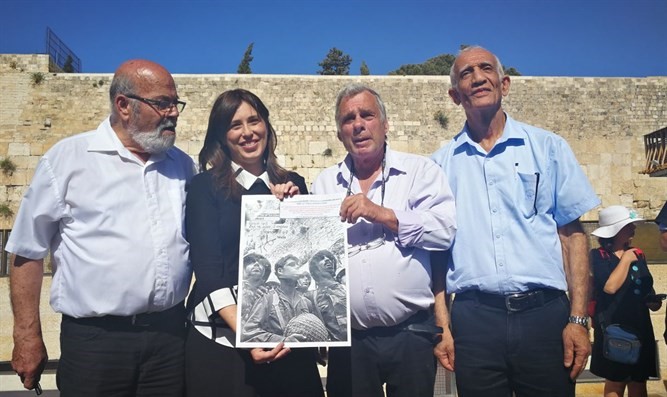 As Israel prepares to celebrate fifty years of the reunification and liberation of Jerusalem, Deputy Foreign Minister Tzipi Hotovely along with those three famous faces from that iconic 1967 picture all meet up to visit the holy site again.

Ms Hotovely led a tour of foreign students studying at the Interdisciplinary Centre (IDC) in Herzliya and at the Hebrew University in the capital, where they were joined by the paratroopers, Dr Yitzhak Yifat, Tzion Karasenti and Chaim Oshri.

The tour took place as part of the Jubilee celebrations in honour of the 50th Anniversary of the Six Day War and the return of the heart of the Jewish people – Jerusalem.

Students from all over the world heard Tzion Karasenti explain how when they reached the Kotel (Western Wall) in 1967, “it was the moment when the beating heart of the State of Israel was restored.”

The paratroopers retraced their steps from the Lion’s Gate when they entered into the old city after fierce fighting with Jordanian troops until their fateful encounter with the 2,000-year-old stones of the Western Wall.

Before the War of Independence, which broke out on 29 November 1947 (when the United Nations voted on the partition plan for a Jewish and an Arab state), there were dozens of beautiful, historic synagogues in the Old City – the oldest dating back to 1267. But Jordan’s army, known as the Arab Legion, showered the Jewish Quarter with mortars launched from the Mount of Olives and eventually entered the Old City, desecrating and destroying every synagogue and yeshivah they could find.

Abdullah el-Tell, who was leading the forces attacking the Old City and later became the military governor of the Old City of Jerusalem when it was under Jordanian control from 1948 to 1967, said that they would destroy everything Jewish, so that the Jews would never be able to return to the Old City.

Jewish life was flourishing in the city, led by Jewish scholar Nachmanides (also known as the Ramban) around 1267. Although conditions became very difficult at times during the next 700 years, Jewish people always lived in the Old City.

But in 1948, when Jordan and its Arab Legion took over, they forced every Jew out and bombed nearly all of the historic synagogues. The Western Wall was turned into a rubbish dump and Jews were forbidden from entering the walls of the Old City while Christians were heavily restricted.

The Deputy Foreign Minister received a signed copy of the world-famous photograph from the three paratroopers and made the following statement to the students. “The longing to reach the Western Wall, and the tears of the paratroopers who returned to the Western Wall after 2,000 years of prayer, are the best answer to those who are trying to sever the deep connection between the Jewish people and their capital.”

She added, “The unification of the city under Israeli sovereignty was the moment when every person of every religion could walk into Jerusalem. Our duty to liberate the city is to preserve a united Jerusalem and to strengthen its status so that the world recognises Jerusalem as the capital of Israel.”

The iconic picture was taken by David Rubinger, just after the liberation in June 1967.
The exact date for Jerusalem Day is calculated according to the Hebrew calendar and this year will fall on Wednesday 24 May.