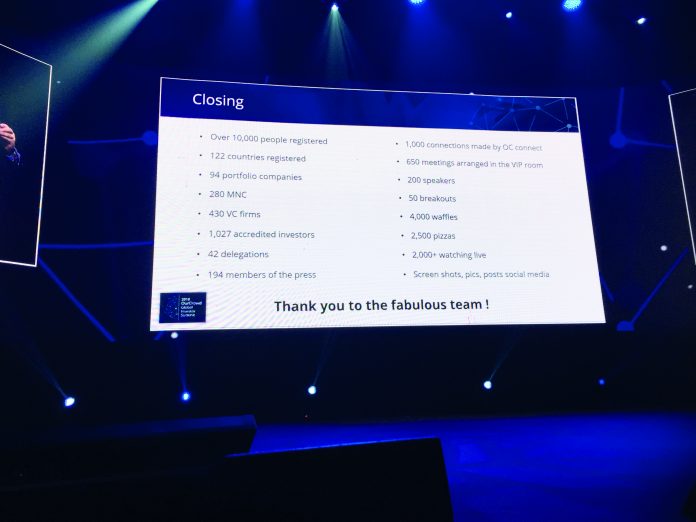 With so many investors, entrepreneurs and start-ups gathered in Jerusalem last week for the fourth annual Global Equity OurCrowd summit, journalists from around the world were overwhelmed with the amount of new technology expected to revolutionise our lives in the coming years.

From driverless taxis, talking robots and sophisticated drones to the doctor behind the computer screen examining you, police cameras identifying missing children on patrol and the blind being told who is in the room with them, there was a great deal of news to write about.

Over the coming weeks, The Jewish Weekly will focus on just some of the latest tech on show being presented at the Jerusalem Conference Centre last Thursday which attracted more than 10,200 people from 96 different countries, some of whom have little or no relations with Israel, officially.

The Our Crowd company who was responsible for putting together this most spectacular and successful event has now raised $650 million for 145 start-ups since it was founded in 2013 and is expected to top $1 billion later this year.

Electricity revolutionised the world just over a hundred years ago. The internet changed the way we operate twenty years ago and now there is no question that Cognitive Artificial Intelligence (CAI) is going to change our society as we know it. No part of industry or society is going to be spared from this phenomenon which actually began four decades ago.

Artificial Intelligence is the science of making computer and micro-chips do things that humans already do.

AI development is primarily concerned with enabling computers to solve complex problems. But it’s not just about building machines or algorithms, AI is about thinking like you and I do and challenges the computer or robot to ‘mimic’ human responses.

You’ll find task-orientated AI at work today in a variety of places, from language processing to face recognition, computer vision systems in driverless cars and even the spam filters in your email.

Imagine that both an AI and a cognitive system had to analyse a huge database of medical records and journal articles to determine treatment for a patient. In an artificial intelligence system, it would have told the doctor which course of action to take based on its analysis. In cognitive computing, the system provides information to help the doctor decide.

Cognitive systems are designed to solve problems the way humans solve problems, by thinking, reasoning and remembering. This approach gives cognitive computing systems an advantage allowing them to learn and adapt as new data arrives and to explore and uncover things you would never know to ask about.

Ultimately, AI and cognitive computing systems are based on the ability of machines to sense, reason, act and adapt based on learned experience. They will relieve us of a wide range of tasks, such as driving, firefighting, mining and much more. We will also see unprecedented developments in medicine, scientific discovery, education and how work gets done.

For a greater insight into the future of AI, The Jewish Weekly will focus on some of these new innovative ways of doing things from next week.