The government formally began the Brexit process on 29 March. This article offers an opinion on what this could mean for the UK economy and markets.

The UK’s economic outperformance among G7 economies in 2016 was a surprise. The triggering of Article 50 of the Treaty of Lisbon was the first step in a Brexit process that will be a long and twisting road. After all the uncertainty about how a Brexit trigger will play out for the UK and Europe, the details will start to get thrashed out at the negotiating table. A slowdown is potentially now on the horizon as Brexit transforms from a debate into a reality.
The UK’s expansion has been fuelled by resilient consumer spending and a weaker pound, which is down 12%1 in trade-weighted terms since the Brexit referendum outcome last June. Investment has been less of a drag than feared as businesses adopted a wait-and-see stance. The labour market has remained robust, with unemployment falling to the lowest level since 1975. Monetary policy support and somewhat reduced fiscal tightening have also played a key part.

UK equities have done well. But much of the FTSE 100’s 19%2 surge since the Brexit vote boils down to a weak pound and rebounding commodity prices flattering the index, given the heavy weight of global banks and miners. For unhedged foreign currency investors, the outcome is less impressive: a gain of 0.4%3 in USD terms. See the chart below.

UK outlook
The outlook for UK assets from here will be driven by slowing domestic conditions, offset in part by the global reflationary backdrop. Political and headline risk will remain high, although if the predicted Conservative landslide materialises during the current election, this will reduce the risk of domestic political uncertainty. With Article 50 now triggered, running commentary on what Brexit means could stir more volatility, primarily in the pound but also possibly in some export- and import-sensitive equity sectors.

Most analysts expect a deeper UK growth slowdown from here. Yet the current year-ahead consensus view may still prove too optimistic. Inflation has jumped, in part due to a weaker currency. Consumer prices rose at a 2.3% annual rate in February, driven by higher food and fuel costs. Higher inflation has pushed real household wages into negative territory, a risk for future consumer spending.

Corporates hold the key
The outlook for corporate investment is key. Recent UBS survey data4 shows one-third of eurozone corporates expect to slash investment in the UK when exiting the EU becomes more concrete. More than 40% expect to reduce UK-based capacity significantly, according to the UBS survey. For now the Bank of England (BoE) is likely on hold given that inflation is above its target, and this is our baseline case for the foreseeable future. Of course this could change if the economic outlook were markedly revised, and we could then see the pound break out of the 1.20-1.25 range in which it has been trading against the US dollar.

With global economic growth having stabilised, there is now a more stable outlook for commodities. The global reflationary environment bodes well for equities including the FTSE 100 in 2017. The exception to this view would be the outlook for UK banks and insurers, which is less clear due to the uncertain effect of the Brexit negotiations. Nevertheless, equities are currently undergoing a remarkably stable period with volatility at ultra-low levels as can be seen from the below chart. 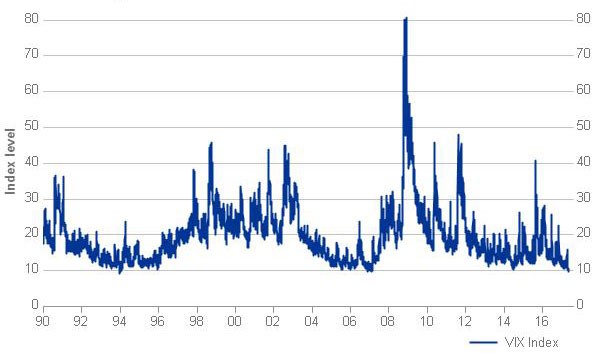 • This week has seen the VIX index (a measure of S&P 500 implied volatility) close at the lowest level since February 16th 2007, a span of nearly 123 months
• To put these levels in context, in the 6,871 business days between that date and the inception of the VIX (in 1990) the index had only closed lower on 14 occasions.

As for the debt markets, shorter duration government bonds look relatively more attractive, as valuations among long-term Gilts appear rich. Likewise, UK credit looks expensive. Corporate bond spreads have been pushed tighter by a faster pace of BoE purchases than had been expected.

Property markets were an area that many expected to be hardest hit by Brexit. So far price appreciation has slowed rather than reversed. While UK housebuilder share prices remain significantly below pre-referendum levels, a weaker sterling has stirred overseas appetite for UK residential property. There is a big question mark as to whether the recent “bounce” in valuations can be sustained, and prices may well unwind over coming quarters.

As ever, when it comes to selecting suitable investments for yourself, diversification is very important. Not only does it ensure you are not over-exposed to a specific sector or risk, but it also allows you to gain from sectors that come back into favour over time.

This material is not intended to be relied upon as a forecast, research or investment advice, and is not a recommendation, offer or solicitation to buy or sell any securities or financial product or to adopt any investment strategy. The opinion expressed is as of 15th May 2017 and may change as subsequent conditions vary.