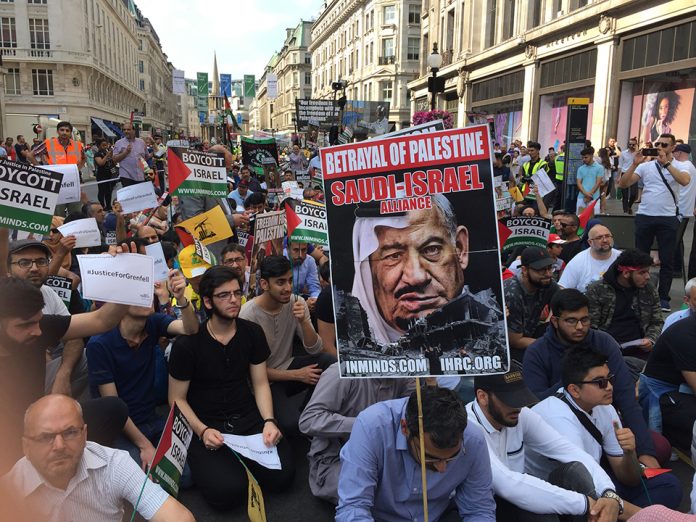 Hatred, incitement and calls for the destruction of Israel were heard throughout central London on Sunday as marchers with Hezbollah flags paraded alongside a speaker on the microphone who blamed the Grenfell Tower deaths on the Zionists.

“The Tory Loving Zionists who kill people in high rise tower blocks” was shouted out several times by a man called Nazim Ali who was given the “privilege” of inciting the crowd for more than four hours.

Although the actual march did not begin until 4pm, Ali began his chanting well before 3pm on Langham Place alongside the BBC wiping up hysteria with poison, racism and lies, and the crowd loved it. The usual “Israel is a terrorist state” and “Zionists murder babies” along with the popular “Palestine will be free” was heard on the loud blaring speakers. But now a new blood libel has been introduced accusing the Jews of being responsible for the horrific fire that killed so many in North Kensington last week.

“Zionist corporations are responsible for the Grenfell Tower disaster,” was shouted out by Ali as police stood by not knowing what to do whilst surrounded by the yellow Hezbollah flags.

Nazim Ali is the director of the Islamic Human Rights Commission (IHRC) which is the registered charity that runs the yearly Al Quds day procession. The IHRC told its followers that it would be permitted to carry and fly “the Hezbollah flag to show support for the political wing of Hezbollah” on the streets of London.

Whilst the British government has proscribed the “military wing” of Hezbollah a terrorist group under the Terrorism Act 2000, the “political wing” is not classed as such which is something that even Hezbollah disagrees with.

In October 2012, the group’s Deputy Secretary-General, Naim Qassem, said “We don’t have a military wing and a political one. We don’t have Hezbollah on one hand and the resistance party on the other. Every element of Hezbollah, from commanders to members as well as our various capabilities are in the service of the resistance and we have nothing but the resistance as a priority.”

In addition, the group’s head, Hassan Nasrallah who said that “If Jews all gather in Israel, it will save us the trouble of going after them worldwide,” is leader of both wings.

Ali led the marchers along Langham Place which runs into Regent Street at just after 4pm with around 500 followers behind him, although others joined the procession along Oxford Street. Pro-Israel demonstrators then suddenly appeared with Israeli flags at Oxford Circus and tried to block the marchers from turning right into Oxford Street. Dressed in a pink shirt and red trousers with dark sunglasses, Nazim Ali instructed his followers to sit down in the middle of Regent Street whilst he called upon the police to protect them from the “Zionist baby killers” who are trying to stop a “peaceful march.” He also criticized the police for not doing their job and accused the “Zionists” of anti-Semitism as shouts went out against the ten Neturei Karta clowns who were dressed in strictly Orthodox Jewish garments.

But earlier, speaker and instigator Nazim Ali was seen on camera being held back as a 20 year old Muslim named Ishmael approached him with an Israeli flag wrapped around his shoulders asking why he makes no reference to all those killed in India and other places around the world? Police moved in to what seemed to be a form of protection for the young Muslim, as Ali shouted out “child killers” and “murderers of British soldiers.” It then appeared that police were warning Ismael against provoking the marchers whilst Islamic security officials were trying to hold back the radical Ali.

WHAT IS THE MARCH ALL ABOUT?

“Al Quds” means “Jerusalem” and the march takes place every year throughout Iran, Lebanon and Western countries. All Sunni Arab states however have banned this march which was introduced by the Ayatollah Khomeini who took power by force in Iran in 1979. The following year, war broke out between Iran and Iraq which Tehran called the “war to liberate Jerusalem.” With more than a million dead, the war ended after 8 years by mutual agreement, but ever since, the Islamic Republic remembers Al Quds on the last Sunday of Ramadan.

However many on the march were Sunni Moslems calling for an end to the “barbaric” Israel and condemning the “baby killers” who are the real terrorists in this world.

“From the river to the sea, Palestine will be free” means the destruction of the entire state of Israel and its 9 million citizens including nearly 2 million Arab Israelis.

In response to why the marchers were not calling for unity or peace or even using the opportunity to condemn radical Islam, the response from many in the crowd was that America and Britain were the terrorists along with their partners Israel.

The mayor’s office was aware of the concerns raised by the Jewish community before the march and had received a full briefing on the policing plan from the Met Police Commissioner. However Mayor Sadiq Khan insisted “As is the case for any group, protesters have the right to march as long as they do so within the law.”

So what is the law Mr Mayor and why is it open to so much interpretation?

In a statement released from Sadiq Khan’s office, it said, “The Mayor has ensured that the Met fully appreciates the potential impact of this march on London’s communities and is monitoring the situation closely. As ever, there will be a zero-tolerance approach to hate crime or anti-Semitism.”

The Jewish Weekly is asking is this free speech or incitement by a British Muslim named Nazim Ali, against the Jewish community?

WHAT CAN BE DONE TO PREVENT THE AL QUDS ANTI-SEMITIC MARCH NEXT YEAR?

MP Mathew Offord wrote to the Home Secretary on Monday morning condemning the racial slurs, terrorist flags and stretching police resources at a time when the threat level for another terrorist attack remains at severe. He said allowing the march to go ahead was irresponsible and thoughtless and asked Ms Amber Rudd to instruct the Metropolitan police to take criminal action against the individual(s) causing the incitement that this paper has already named.

The Campaign Against Anti-Semitism are themselves gathering evidence to be used in a possible legal case against the government if the law is not changed to prevent this type of hate on London’s streets in the future. The group liaised with police officials before the march and explained that if the Hezbollah flag was allowed to be flown, it would be an extremely provocative act.

Gideon Falter of the CAA spoke of his frustration at the general anti-Semitic rhetoric heard in many circles and said prison sentences proscribed by law are not being imposed. “The issue is a failure to enforce the law and failure to prosecute,” he said.

Before the march, lawyers for Campaign Against Antisemitism had challenged the police to use their powers under section 12 of the Public Order Act 1986 to impose a condition on the procession so that marchers were in no doubt that they cannot show the emblem of Hezbollah. However the Metropolitan Police Service refused their request.

ROUND UP OF THE NUMBERS

Although around 500 pro-Palestinian demonstrators set off from Langham place last Sunday, approximately another 300 joined them long the march as hundreds of police were assigned to the operation with more than a dozen police vans following the procession.

At Oxford Circus an estimated 100 pro-Israel supporters appeared and the Zionist Federation reported another 500 were at the counter demonstration in Grosvenor Square.

It is clear that the pro-Palestinian Al Quds numbers were way down from previous years probably due to the geo-political landscape changes in the Middle East where Saudi, the Gulf States and Egypt are forming an alliance against Iran, Hezbollah and the Shia militias in Iraq. The recent terror attacks in the UK also may have kept pro-Palestinian supporters away and the realization by some that Iran is behind the wars in Syria, Iraq and Yemen killing many Sunni Muslims.