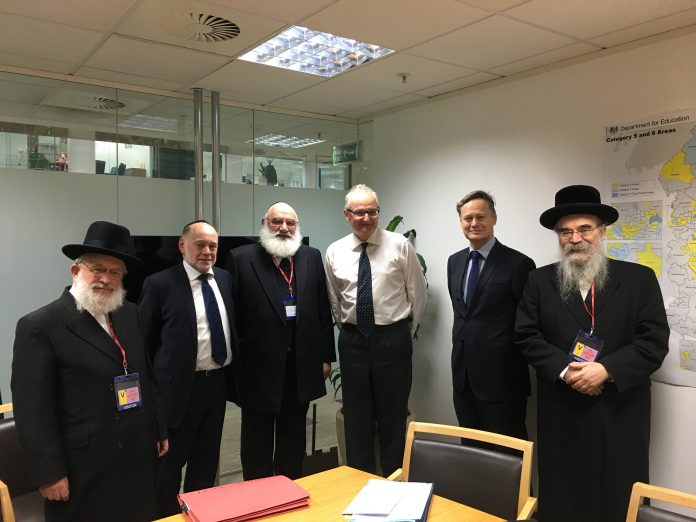 A delegation from the Union of Orthodox Hebrew Congregations met last week with Lord Theodore Agnew, Minister of State at the Department of Education.
The meeting was arranged through the good offices of Hendon MP Matthew Offord. Its purpose was to apprise the Minister of the deep concerns of the Chareidi community regarding the over-intrusive regulation of faith schools.
All the members of the group addressed the Minister on different aspects of the problem. Introducing the group, Mr Chanoch Kesselman, Executive Coordinator, explained that the UOHC is the main representative body of the UK’s Chareidi Jewish community. Monitoring education was an extremely important part of its work.
UOHC Executive member Cllr Brian Gordon said that orthodox Jewish faith schools had an excellent track record and were recognised as high achievers academically and socially, especially in the Borough of Barnet, home to the largest Jewish community in the country. Yet those schools were now expected to teach matters of gender and personal relationships to children in a manner that is contrary to Jewish law and conflicts with the ethos of those schools. Such unprecedented external pressures, under the grand pretexts of community cohesion and diversity, are a form of religious discrimination, and are inconsistent with freedom of educational choice.
Rabbi Avrohom Pinter, Chairman of the UOHC External Affairs committee, spoke of his experience as a Principal of schools. He urged the Minister to appreciate Judaism’s strict religious rules governing relationships issues and that certain very personal matters could not be taught or discussed in the classroom. It was not a matter of being disinterested in concerns about extremism; on the contrary, combating extremism, racism and intolerance are an integral part of Jewish teaching.
Rabbi Yehuda Baumgarten, Chairman of the Education Committee, said that as an advisor for many years to strictly orthodox Jewish schools he had played a key role in establishing a good liaison and understanding on syllabus matters with the Department of Education. However, there could be no compromise when it came to the newly categorised “protected characteristics” relating to “alternative lifestyles” and recently legitimised forms of “marriage” which could not be accommodated within any orthodox educational framework.
Mrs Chaya Spitz, Director of Interlink Foundation, explaining that children from strictly orthodox families were sheltered and very innocent compared to those in wider society, told the Minister that orthodox schools were facing an existential challenge that was unparalleled. Schools in Hackney previously regarded as outstanding were now finding themselves on the wrong side of “British values”. Ofsted inspectors had become obsessed with making demands about personal relationships, marking orthodox schools down on those subjects, even though they complied glowingly in nearly every other area. It was demoralising for the staff of those schools, destroying their incentive to satisfy the inspectors at all.
Lord Agnew, in the company of Department of Education officials, appeared very sympathetic to the concerns expressed. He reaffirmed that faith schools were an integral part of the country’s diversity in education. The Government had no desire to undermine the traditions of any religion. He agreed it made no sense to expect orthodox Jewish schools to teach concepts totally beyond the comprehension of children raised in a protected religious environment, without access to social media – methods of upbringing which the Minister accepted were very admirable.
The Minister agreed that OFSTED inspectors should be better educated on the religious requirements of the schools they were visiting. He suggested orthodox Jewish educators might engage directly with OFSTED to try and facilitate this. He said OFSTED was an independent inspectorate appointed by Parliament, not directly accountable to the Department of Education. He would nevertheless convey the concerns of the UOHC to the head of OFSTED and help to encourage a meeting between the UOHC and the OFSTED leadership. A meeting is currently being arranged.