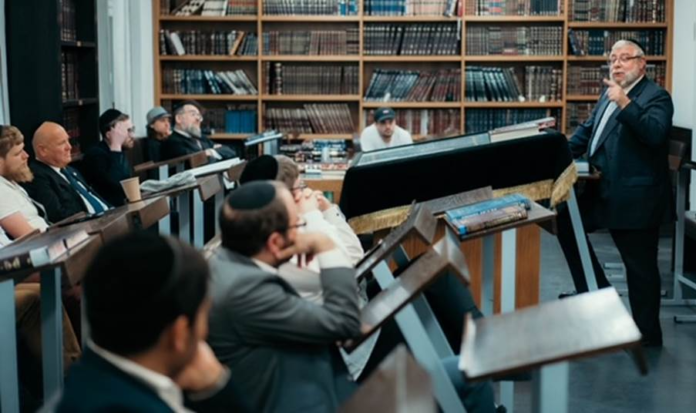 First, Chief Rabbi Goldschmidt met with Florian Hermann, a Member of the Bavarian Parliament, and heard of his commitment to strengthen and protect Jewish life in Bavaria. Home to a number of synagogues and communities, Bavaria’s Jewish life is welcomed by the local Parliament. In May, last year the south-eastern German state welcomed and hosted over 300 rabbis for the CER’s conference.

In Berlin, Chief Rabbi Goldschmidt delivered shiurim at the Rabbinical Seminary and at the local community synagogue of Kahal Adass Jisroel. He spoke about the month of Elul and the upcoming Jewish Days of Awe.

Both institutions (or their somewhat forerunners) date from pre-War times, and have an illustrious history within the Orthodox Jewish community of Berlin. Previously, Berlin’s Rabbinical Seminary was directed by such legendary figures as Rabbi Dr David Zvi Hoffmann (1843-1921), a foremost scholar both of rabbinics and academia, as well as the world-renowned halachic expert, Rabbi Yechiel Yaakov Weinberg (1884–1966).

About thirteen years ago, on the initiative of Chief Rabbi Goldschmidt and thanks to the generous support of Mr. Ronald Lauder, Rabbi Yehoshua Spiner re-established a yeshiva in the city, as a recasting of the pre-War Hildesheimer Rabbinical Seminary. Since that time, the yeshiva has trained and ordained dozens of rabbinic graduates, who have then assumed leadership of congregations throughout the continent. Until recently, the president of the Beit Midrash was Dayan Chanoch Erentrau. The President of the Yeshiva is Rabbi Moshe Mordechai Farbstein, head of the Chevron Yeshiva in Jerusalem. Rabbi Farbstein often comes to the Yeshiva to teach and examine the rabbinic students. Chief Rabbi Goldschmidt also discussed communal affairs with Rabbi Dovid Roberts, rabbi of Kahal Adass Jisroel Berlin and a member of the CER. This Orthodox community in the heart of the German capital was was founded in 1869. After its destruction during the Nazi era, it resumed operations in 1986. Thanks to Rabbi Roberts, it continues to thrive.

Chief Rabbi Pinchas Goldschmidt, President of the CER, said, “It is an honour to be welcomed into Berlin, who’s rabbis, lay-leaders, and students are so devoted to the thriving Jewish life here, despite the horrors of the past. I have had a number of talks with politicians and dignitaries, who also assure me that this flourishing will only be supported and safeguarded for the future. I was certainly inspired by this community. An inspiration that will aid me in my preparations for Rosh Hashanah.”